A Futile and Stupid Gesture hits Netflix on January 26th.

A Futile and Stupid Gesture is the story of Doug Kenney based off the book by Josh Karp, one of the co-creators of the National Lampoon’s magazine as well as the writer for Animal House and Caddyshack. It is directed by David Wain who is most famous for writing Wet Hot American Summer and directing Role Models. Kenney’s story is a classic yet tragic tale at times, and the film specifically chooses not to explore some of the larger emotional depths of the pain that Doug Kenney was in, instead focusing on the good times and the humor. As you begin to understand the character of Kenney throughout the movie, you start to understand that this is exactly what he would have done in real life, skirting the opportunities to open up and choosing humor as both a defense and coping mechanism.

All credit goes to David Wain for telling Kenney’s story in a very fast and loose pace that resembles much of the sense of humor that Kenney was famous for. Wain’s focus is drawn more to the essence of what made this man tick rather than historical and physical accuracy which allows for the film to have a fair amount of freedom in its delivery. This plays more into the film taking on the shape of a comedy first that just so happens to be a biopic on the side. While some might think that Wain’s unconventional method of telling Kenney’s story and ultimately his death might not venture deep enough to make any sort of emotional impact on the viewer, I would argue that his approach not only strikes the perfect amount of balance between humor and drama for Kenney’s story but it also is told in a manner that Kenney himself would be proud of and appreciate. After all, we are talking about one of the most influential comedy writers in the past 50 years. What better way to celebrate his life than through the medium that made him.

Emotional depth aside, A Futile and Stupid Gesture does an excellent job at moving through Kenney’s life, loves and struggles while making sure to take time to focus on the more important portions of his rise to fame, however, where it falters is that due to its lack of drama in some of the more serious moments the film doesn’t elevate past simply being a fun watch. But that isn’t necessarily a bad thing. In fact, it helps boost Kenney’s story to a place of endearment despite its tragic end. Even then, the film is able to find the humor in a very bleak situation which in its own twisted way is beautiful and oddly appropriate. At its core, A Futile and Stupid Gesture is a solid albeit strange story about one of comedy’s most influential writers and while it doesn’t go as emotionally deep as it probably should it still is able to tell a complete story about a man who used both humor and pain as weapons for success in his life.

I give A Futile and Stupid Gesture a B+. 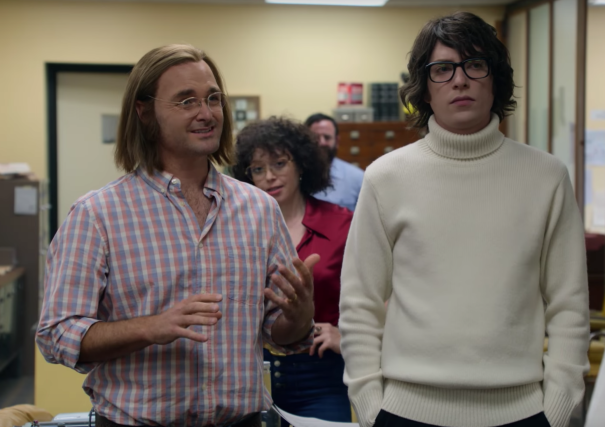