The Obama Portraits go on view on August 27 through October 24, 2021 at The Brooklyn Museum.

The unveiling at the Smithsonian’s National Portrait Gallery, Washington, D.C., in February 2018, of the official portraits of President Barack Obama and Mrs. Michelle Obama was a historic moment. Kehinde Wiley’s portrait of President Obama and Amy Sherald’s portrait of the former First Lady have inspired unprecedented responses from the public. The portraits have become iconic with many of us recalling the wonderful photos of many young girls viewing the painting of Michelle Obama.

Accordingly, the Smithsonian decided to send the portraits on tour so even more people could access them. This five-city tour travels the United States from June 2021 through May 2022 and is expected to reach millions of people who might not otherwise have an opportunity to view these remarkable paintings. The paintings are now on display at the Brooklyn Museum in a gallery devoted singularly to them, requiring special tickets. It’s an appropriate NYC location, as the museum holds one of Gilbert Stuart’s full length portraits of George Washington in its permanent collection. By referencing other art across the museum’s galleries, the exhibit invites visitors to think about how portraiture has given visual form to the ideas of power, identity, status and legacy throughout history.

With the Obamas’ selection of these artists to produce their official likenesses, these painters became the first Black artists to receive the Portrait Gallery’s commission for portraits of a president or a first lady. In painting these two portraits and in consultation with their sitters, Wiley and Sherald at once spoke to and reenvisioned the centuries-long tradition of representing political leaders. The pictures of the Obamas present a striking contrast to the formality of earlier presidential portraits and images of first ladies. The Obamas’ choice of these innovative figurative painters reflects the couple’s deep engagement with contemporary art and culture. Wiley and Sherald are firmly rooted in the tradition of portraiture and in the depiction of Black individuals, making them visible in museums and by extension in American cultural representation – an approach that aligns with the Obamas’ priorities. The final portraits grew out of close bonds developed between the artists and their sitters highlighting a successful intersection of artistic visions and the construction of presidential legacy.

Amy Sherald is known for her depictions of everyday Black men and women painted with grayscale skin tones that complicate ideas around race, solid backgrounds that highlight the subject, and focus on elements of the sitter’s clothing. She portrays Michelle Obama seated with her hand on her chin, “thoughtful and confident” in a striking dress by designer Michelle Smith’s label Millie that fills the lower half of the painting. While the vibrant geometrically patterned dress is evocative of modern art, it is perhaps also grounded in the rich quilt making traditions of African American women. Here fashion continues to play a symbolic role. Sherals considers the former first lady to be someone “women can relate to – no matter what shape, size, race or color….”

Kehinde Wiley is known for his monumental portraits of contemporary everyday black sitters assuming poses drawn from paintings of aristocrats and religious figures from the history of European art. Instead of a heroic post drawn from a historical work of art, Wiley depicts Barack Obama in a suit but without a tie, casually seated in a chair, a pose that brings him very close to the spectator’s space. Despite the power of his office the decision to appear approachable and a man of the people was clearly something the president favored and which Wiley effectively delivered. The portrait continues Wiley’s practice of incorporating patterned backgrounds that often include stylized motifs drawn from nature. In a departure from his usual approach here the floral backdrop includes symbolic meaning specific to Obama. For example the chrysanthemums reference the official flower of Chicago, the Jasmine evokes Hawaii where Obama spent the majority of his childhood, and the African blue lilies stand in for his late father from Kenya.

After the Obamas selected these artists from a short list of candidates the intensive work began of bringing the portraits into existence in the brief span of one year’s time in collaboration with their subjects. Sherald and Wiley created portraits through a process that included both photographs and in person sittings. For Wiley, known for his technique of “street casting,” asking strangers to pose as a figure based on a painting of their choice, and for Sherald who discovered her subjects in the course of daily life, these commissions offered an opportunity to represent powerful patrons. With their input, the artists reinvigorated the tradition of the state portrait, resulting in extraordinary works of art.

The Brooklyn Museum curatorial staff has done a beautiful job exhibiting the portraits, with an accompanying video from the Smithsonian that explains the process of creating the pieces and their reception. Around the spacious gallery, explanatory information about the painters and the works line the walls. It won’t take more than 30 minutes to take in the whole experience, but it will be time well spent.

Tickets can be purchased at https://www.brooklynmuseum.org/exhibitions/obama_portraits. The museum is following NYC COVID-19 admission rules. 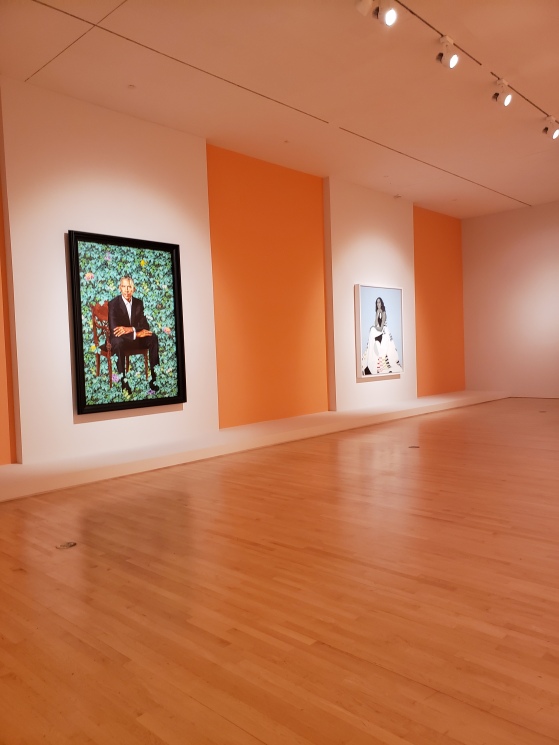