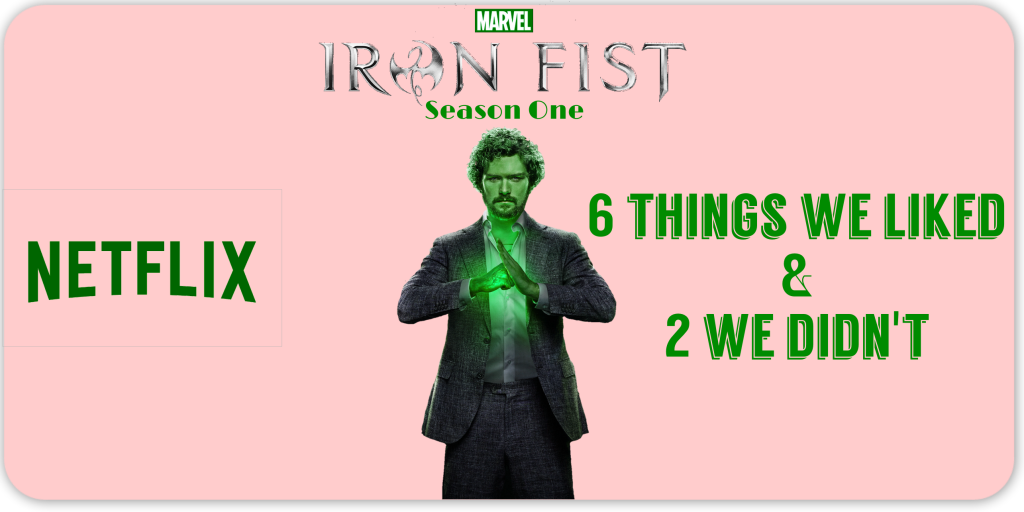 This post is brought to you by: Reload Grips

The final Defender has arrived! Iron Fist joins Netflix’s library of Marvel Comics shows today, March 17. It’s definitely not the best of the four, but Iron Fist stands on its own as entertaining television. Here are the parts we liked:

Finn Jones brilliantly portrays the titular character. He gives life to Danny Rand, and is overall a great casting choice, which is to be expected with Marvel. I am used to seeing Finn as Sir Loras Tyrell in Game of Thrones, so I wasn’t sure if I could fully enjoy him here. Needless to say, I shouldn’t he been worried.

References galore! I’m sure I didn’t catch all of them, but in just the first six episodes there are plenty. Viewers will also recognize some old faces, such as Rosario Dawson’s Claire Temple and Madam Gao. The Hand, previously introduced in Daredevil, serves as the main antagonist.

Overall, Iron Fist has a fair amount of action. The fights are all the more exciting with Danny’s powers. Great choreography makes the battles easy to follow. Colleen Wing’s badass skills are also featured.

The show is able to give a complexity to each of its characters, while not overdoing it. Throughout the season, there is always just the right balance of storytelling and character building.

Marvel’s Netflix shows are generally dark and almost reminiscent of Zack Snyder’s DC films. While Iron Fist is no comedy, it tends to have a lighter mood than most dramas. This is due to Danny tending to be a chilled dude.

If anything, this show will make you even more pumped for the upcoming Defenders miniseries. I can’t wait for Daredevil, Jessica Jones, Luke Cage, and Iron Fist to meet each other.

Now, here are the parts we didn’t:

Every twist, turn, and every plot point was way too obvious. Iron Fist felt like everything you’ve seen before. The show is still watchable, but this issue definitely drags it down. You find yourself mindlessly waiting for scenes to be over because you can guess the next line of dialogue.

This was a personal gripe. Lots of comic fans hate origin stories in movies and TV, but I believe they are necessary. That’s why it was a bit annoying to wait so late into the season for a full explanation of Danny’s transformation into the Iron Fist.