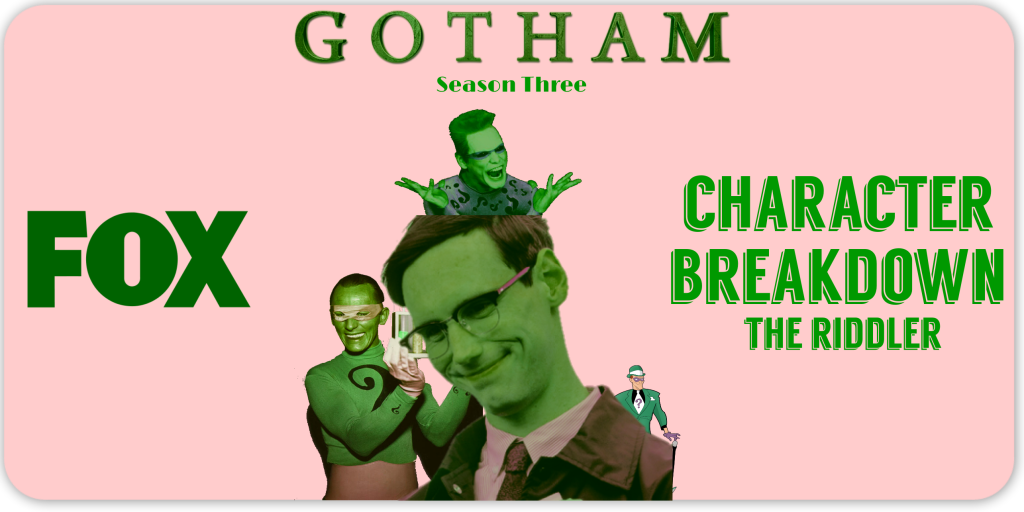 With his perplexing puzzles, The Riddler is one of Batman’s most iconic villains, and has been portrayed outside of comic books many times. In the April 24th spring premiere of Gotham, Edward Nygma finally accepts his crazed fate and takes on the Riddler name. The ingenious baddie has had many big and small screen appearances. We took a look at some of the stand-out versions.

The Riddler’s first mainstream appearance was on the famous 1966 Batman TV show. He was played by Frank Gorshin most of the time, but John Astin substituted occasionally. Due to the popularity of Gorshin’s Riddler, the comic version was upped for one of the Bat’s many gimmick villains to one of Batman’s main rogues.

1995’s Batman Forever is infamous for many reasons, and all agree it was

mediocre at best. Many forget Val Kilmer’s Caped Crusader, because the real star of the show was Jim Carrey’s Riddler. In a bright green jumpsuit with crazy hair, The Riddler managed to shine even in the mess that was Forever.

Nygma also appeared in the much beloved Batman: The Animated Series as an ex-Wayne employee voiced by John Glover (Lionel Luther on Smallville, as well as the Floronic Man in Batman and Robin). The Riddler’s oddest animated form was in The Batman, where he appears as a crazed, long haired man. He was actually voiced by the actor who played Freddy Krueger, Robert Englund!

The Riddler also makes several appearances in the Batman: Arkham video game series. In these games, he is the center of a “collect-a-thon” which provides most of the games padding and challenges.

In DC’s latest take on Gotham City, we get to see the Riddler in a pre-Batman world, meaning a detailed look at his origin. Cory Michael Smith does justice to the comic character, even if the move to make Nygma romantically involved with The Penguin was trash.

The Riddler has made a lasting impact on the Batman franchise and has befuddled viewers since his first screen debut. In the coming episodes of season three, it looks like Edward Nygma will leave his mark on the world of Gotham as well.