The Great Indoors and Kevin Can Wait recently concluded their seasons. Man with a Plan‘s finale airs May 15, 8:30pm on CBS.

CBS has been providing top rated TV shows for over a decade. As a comedy lover, I am always excited to see what new shows ‘The Eye’ will produce to follow in the footsteps of greats such as How I Met Your Mother and The Big Bang Theory. This year I was even more excited when I saw that they were bringing in three of my favorite comedic actors ever in Matt Leblanc (Friends), Joel McHale (Community), and Kevin James (The King of Queens). I immediately put Man With A Plan, The Great Indoors, and Kevin Can Wait into my DVR schedule. After a full season in the books for each show, here are my thoughts.

Man With A Plan

After playing one of the most iconic characters in TV history as Joey Tribbiani on Friends, Matt LeBlanc had really stayed out of the comedy game until announcing a return to TV this year. (I refuse to acknowledge Episodes as a TV show.) The good news is that although Adam Burns isn’t half the character that Joey was (but will any character ever be?), Matt LeBlanc is still a great actor. I enjoyed watching the manly Burns have to take on the responsibilities of taking care of his family and the struggle he endured. The supporting actors and characters in this show are fantastic and give the show many different dynamics. Diana Maria Riva as Mrs. Rodriguez and Matt Cook as Lowell both play their roles perfectly, as well as Kevin Nealon who plays Adam’s annoying, yet hilarious brother. If I had to critique this show it would be on the cast chosen to play the two oldest Burns children, Kate and Teddy. The show often overuses its clever jokes. But overall I think this is another CBS hit, and it’s very family friendly as well.

I give Man With a Plan‘s freshman season an A-.

I always thought Joel McHale was an underappreciated actor in an underrated show (#sixseasonsandamovie!). Hopefully he gains some well deserved praise for his work in the outdoors magazine oriented The Great Indoors. This show has a bit more adult humor than the other two newbies, but it’s not overwhelming. Once again, I am a fan of most of the supporting cast, and I think this show actually has the most potential to become the next big CBS powerhouse (though I don’t think it will ever come close to say, The Big Bang Theory). I love the side plots and running jokes that they’ve had so far, but I am a little afraid that they will run out of ideas for new stories soon.

I give The Great Indoors‘ first season a B+, but I think it could get even better in coming years.

This is a case of a solid show which I feel is really being pulled down by a lack of a good supporting cast. Kevin James does a fine job as the lead and Erinn Hayes is fine as his wife, but other than them the only other actor I like is Ryan Cartwright as Chale. The show has a solid concept but with this cast I don’t see it lasting more than a couple of seasons before it fizzles out.

I give Kevin Can Wait a C-.

Although I don’t think any of these new sitcoms will turn out to be legen-wait for it-dary, CBS has produced two more shows that could become mainstays on primetime for years. And one with Kevin James, until Adam Sandler rescues him from TV hell. 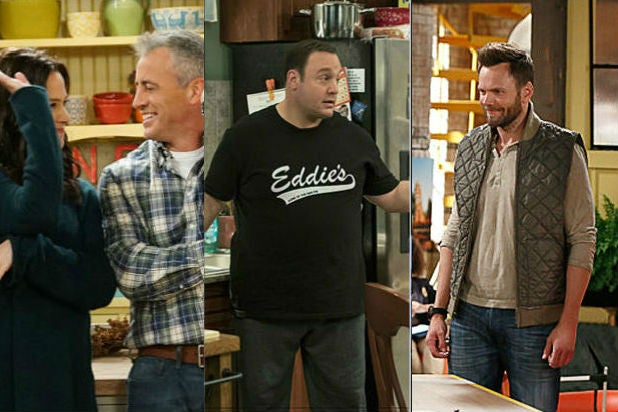