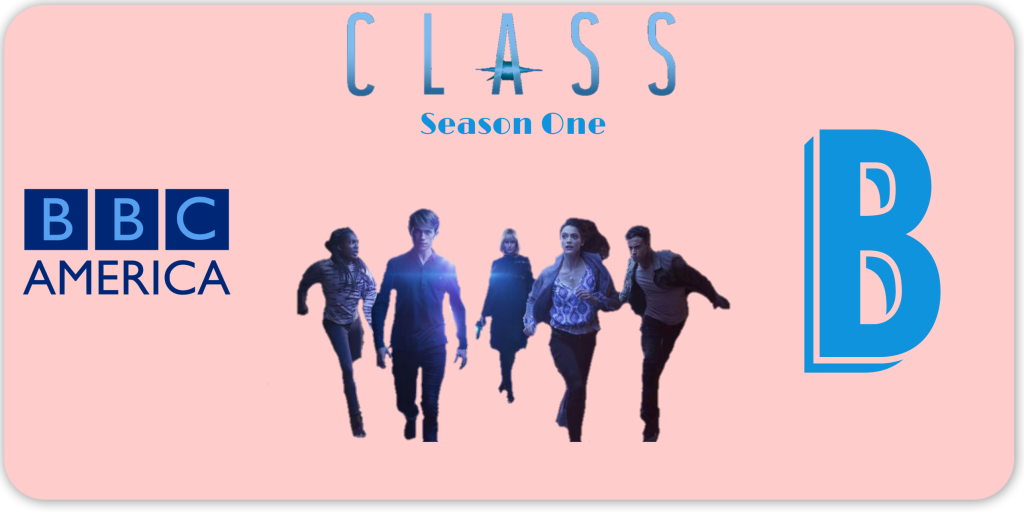 Season one of Class drew to a close in style yesterday with a finale that was widely lauded by fans. The run as a whole wasn’t as well received as the finale itself, but it was still met with positivity. I’m going to discuss everything that’s been good and not so good with season one, and whether or not Patrick Ness deserves a go at writing a second season.

For almost a year, all we knew about Class was that it’d be set at Coal Hill and the four main characters were teenagers and would be joined by Katherine Kelly. Greg Austin, Sophie Hopkins, Fady Elsayed and Vivian Oparah were named as the main protagonists and that’s all we really knew up until a few weeks before episode one aired. Each character was very different, each character went on their own journey and each character had a story arc that drew nicely to a close in yesterday’s finale.

I’ll start with Greg Austin’s character, Charlie. For me, Charlie was the most frustrating character. Most of the time I felt as though he never fully reached his potential in any episode. After episode one, which was definitely his strongest until the finale, I often thought that he was treated like a spare part. Often lurking in the background and never really the centre of attention for the bulk of the series, Greg Austin’s undoubted ability to act was underused by Patrick Ness. I’m not really sure why this was. His character, along with Miss Quill, had the most potential, and even she featured more than he did. Having said this though, I really enjoyed Charlie’s growth from someone who avoided violence at all costs, to somebody who would do anything for those he loved. His relationship with Matteusz was the fuel that changed him into a more fierce and confrontational character and that transition was great to watch. At first, I would’ve welcomed his subsequent death in the finale as I felt it would’ve betrayed the plot if he hadn’t died. I also thought his character had gone as far as he could have, but when I think of him living with the guilt of his actions, I’m excited about where Patrick Ness will take him next, if given the chance.

April, who was played by Sophie Hopkins, seemed to be the character who Patrick Ness paid the most attention to. She too, went through quite a change. From a seemingly innocent and peaceful girl in episode one, by episode four she was a fighter and afraid of nothing. For most of the series I enjoyed watching April. Sophie Hopkins was superb in seamlessly changing from the quiet unassuming student to a warrior. However, I felt as though she featured a little bit too much in the finale. I know that she was the new Queen of the Shadow Kin and she essentially faced a rebellion, but none of that was ever really relevant in the plot until the build up to her death. However we still saw lots of her as she finally worked out that she loved Ram. Her relationship with Ram seemed to just trundle on idly, when it should’ve been resolved in episode six. That way, more focus could’ve been on Miss Quill, Charlie and the Governors in the finale. Having said that, her death, or apparent death, was written, acted and shot to perfection. It was a fitting way for her character to go. It was reminiscent of Clara’s exit as April had become someone who was eager for action and in the end that led to her downfall. “Let me know I was brave” was a line very similar to Clara’s last in Face The Raven and I liked the similarity between the pair’s demise. I was less keen on April returning as one of the Shadow Kin. Partly because it was just unnecessary and spoiled a perfect death, and partly because it just looked ridiculous. Overall though, April was another character who I really enjoyed watching change as her situation grew more and more difficult.

Ram and Tanya were perhaps a little less prominent than Charlie and April, but I still found them fascinating to watch. Ram undoubtedly had the roughest ride of any character in the show. His date to the prom in episode one was brutally murdered in front of him before he lost his own leg. Later he looked on as his dad was murdered before holding April’s dead body in his arms. He was used as the fall guy throughout the season and that probably helped his character change as much as he did. Starting off as an egotistical and arrogant footballer, Ram’s trauma helped him change into a caring, kind and thoughtful young man. As much as this was brilliant character development, I don’t really know where Ram can go from here and I think maybe this could be the end of Ram’s story, on screen at least. The most underused character of all was Tanya. Apart from Nightvisiting, Tanya only really starred for ten minutes or so in the finale, and when you think about that ten minutes, it begs the question; why was she so underused? In the finale she developed an incredible amount in ten minutes. Going from studying hard for her exams, to learning how to fight after the death of her mother, showed a sturdy and fierce side to her and it’s something I wish I had seen more of. Her little double act with Miss Quill was marvellously entertaining and the fact it only lasted for ten minutes was disappointing.

One of the highlights of the series was how diverse and real the show felt. Ram’s Sikh family, Charlie and Matteusz’s relationship, April’s mum’s disability and April’s dad’s history among other things gave the show a real gritty feel. I previously mentioned in episode reviews that at times, some of the dialogue around some of these issues seemed a little forced. I think that’s to be expected though when diversity is the main theme of the series and Patrick Ness should be applauded for tackling so many challenging topics head on. The problems that each character faced in fitting in was like the gel that brought individual plots throughout the series together. Without tackling the issues I mentioned, the series as a whole would have felt bitty. Sci-fi and real life don’t usually go hand in hand, but Ness did a super job of making the two go together.

The quality of individual episodes definitely varied throughout the eight. After a good start, the series definitely lulled for a while. It wasn’t just a small lull either. Three episodes out of eight was nearly half the season, and drops in form like that can’t become commonplace if the show hopes to continue for several more years. Episodes three to five, in my opinion, were paced far too slowly and became quite tedious watches. Maybe part of this was because the first two episodes flew by at rapid speed. Balance in episode pacing is needed so that such a contrast in entertainment from one week to another is avoided. To be fair though, the last three episodes did pick up again and saved the series from fizzling out.

So, should Class return? Well, if you asked me this after episode six I would’ve said no. But if it was down to me today, I would definitely order more. Patrick Ness has left some big questions unanswered. Who really are the Governors? Why are they appearing to work for the Weeping Angels? Will we find out about the origins of the Weeping Angels? How will Charlie deal with what he did in the finale? What race will Miss Quill’s baby be and will she survive the birth? Ness has also proven he can write science fiction well, and tackle society’s biggest taboos. There’s definitely an open goal for the BBC to score into by renewing the show, and I certainly hope they take their chance.

If there is a second season there are a few things I hope change. I hope April and Ram leave the show. I know that might sound harsh, but I’m really not into the idea of April returning as a Shadow Kin. If there is more Class to come, I hope that concept is quashed, and quickly. I’m also quite tired of April and Ram’s relationship. The “Does she love him or doesn’t she?” question should’ve been drawn to a close in Detained. The fact it kept going into the finale irked me and I don’t want anything like that to continue in any future episodes. Ram also surely can’t hang around after suffering such tremendous loss in season one and I think his story has naturally come to an end. Tanya and Miss Quill proved that they had brilliant chemistry in the finale so they could easily star in and carry the series. Seeing those two along with Matteusz, try to pick Charlie up from his grief and guilt would be great to follow. The Governors and Weeping Angels would also hopefully feature a lot more and the series would surely be shaped around “The Arrival”. So my hopes would be a group of four in Miss Quill, Tanya, Matteusz and Charlie facing up to the governors in a second season. I’d hope would be given thirteen episodes rather than eight. That way, some of the more personal story lines would be given more time to flourish and wouldn’t seem to get in the way of the overall plot as much as some did in season one.

As debut seasons go, this was a valiant attempt from all involved. I really enjoyed watching all of the main characters develop and adapt to the world they found themselves in and all of the young actors and actresses did themselves proud. Patrick Ness bravely tackled many of society’s prominent issues and did a great job of fitting these into the story in a natural manner. If I had to give the season a mark out of ten, I would go for something in between seven and eight. It was a long way off perfect, it suffered a mid-series blip, but there was a tremendous amount of potential shown by the scripts, the actors and actresses and from the cliffhangers left by the finale. Surely the BBC will give the fans what they want? There has to be a season two. Patrick Ness deserves another crack and a longer run at continuing what he started.

I give Class a B.

[Editor’s Note: Huge thanks to Matthew Greer from Talking Tardis for this guest post! Check out his site for more great content!]