Give me a complete rundown of what happened on both nights. Let’s start with the first night.

The first night I went to the game with me and a couple of buddies, and I brought a sign and wore a t-shirt to show my displeasure with the Mets’ manager. In between innings and during pitching changes, I quietly held up the sign in a silent protest. I wasn’t disruptive or obscene, and I wasn’t obstructing anyone’s view. Actually all the fans in my section, which was about 30 people because of the rain, all supported him being fired, and did not care about the sign.

I was talking to a fan behind me, and when I had my back turned, this woman came to my seat, took the sign and walked away with it. When I turned back around, I noticed that the sign wasn’t there, and my friend next to me said that she reached over him and took the sign. So I respectfully and calmly walked over to her, and I asked her why she took my sign. She was telling me that I could have it back after the game. And a fan from a section over saw what was happening, and he came over and was telling her that it was my right to hold up the sign, and it shouldn’t have been taken from me. And then, in a blink of an eye, no argument, no confrontation, a SWAT team of 10 huge security guards dressed in all black, came into the section and took me and this fan out of the stadium. As we were being escorted, I kept asking “Why am I being thrown out?” and they had no idea why. They just said it was “protocol.” While we were walking in front of the stadium, we were talking to some NYPD officers, and we told them the story, and they told us that the security and the police in the stadium are ordered by the Wilpons to kick out anyone who expresses an opinion against the organization.

And what happened the second night?

After the first game, I thought maybe it was just one bad night, one bad security guard, one bad apple. I already had tickets to the next game, so I went, and the same situation as the night before. They were getting blown out so in a silent protest, same as before, I lifted up the sign. I was in the same section as the night before, and that is where the video starts. Once she saw the sign, everyone took their phones out, because they knew that something was going to happen. And as you can see in that video, I do respect authority and I’m not a confrontational person. I wasn’t resisting, so I was very surprised that she was putting her hands on me and grabbing me, trying to rip this sign out of my hands. Out of all these drunks who start fights, the stadium’s security focused on me, just someone putting up a sign. After the video ends, a couple of NYPD officers put me in custody, and I was put in handcuffs and detained. I was told by a couple of security guards that I was going to be spending the night in jail, and they had me wait in an alleyway on field level, waiting for one of the head supervisors to make a decision, of whether or not I would actually be spending the night in jail or not. This head supervisor, came running as fast he could, uncuffed me, and he was telling me that I had done nothing wrong, and I do have the right as a fan to hold up the sign and hold the shirt and I can continue doing it.

When did you get the idea for this Fire Terry Collins campaign?

A week before the incident. I actually went to a game or two with this sign and shirt and I wasn’t bothered. Maybe it was because nobody with the organization noticed it, but it seems like once they caught on, they wanted it out of the stadium.

It seems like most fans of baseball and most Mets fans are actually on my side, because they see that a person was exercising their 1st Amendment right about their baseball team, who are 10 games under 500. and most fans do want this manager gone. But there are also people on social media who disagree with me, and they just assume that I’m looking for trouble and that I was starting up and my goal was to be a troublemaker, but that is totally not the case. As you can see in the video, I’m just putting up the sign. I’m not really saying anything, just literally holding up the sign. Also on social media, there are these die-hard fans who I call “blind Mets fans” who no matter how bad the team is doing will always defend the manager and the ownership, almost to the point where it’s a sickness. And when I posted this video on a couple of Mets fan pages, these people were sending me death threats. Literally telling me horrible, disgusting messages.

With these videos out there now, how far up do you plan on taking this? You said you think it’s your 1st amendment right. Do you have any plans to sue or something of that nature?

I would rather not comment on that at the moment, but I am not letting this slide, and I do feel that my 1st amendment rights were violated and I do feel like this woman overstepped her bounds by putting her hands on me. If I don’t do something then this will happen to other fans in the future and that’s just not right. A fan should go to a game feeling comfortable about exercising his or her 1st amendment right, without feeling like they’ll be abused by security.

What is your response to Mets sources saying that you were “inebriated and belligerent” at the game?

If I was acting disorderly and if I was illegally selling merchandise inside of the stadium, why did the head supervisor of the stadium let me go instead of arresting me? And I have a bunch of witnesses at both games that can testify that I wasn’t doing anything wrong or illegal. I am sober and I don’t drink, so it is absurd and disgusting that the ownership of the team I grew up rooting for is now defaming my name.

Do you have anybody in particular that you would like the Mets to hire as manager if they were to fulfill your wish and fire Terry Collins?

I’m not an over-reactive over-emotional fan who jumps on the bandwagon when the team is winning and get all down on them when they’re losing. I would like to consider myself a very knowledgeable baseball fan. As a personal preference I’d like to see them hire a manager who can light a fire under these players. I want somebody that has a different approach to winning ballgames, and someone that would bring grit like a Wally Backman or a Lenny Dykstra. I understand that these guys don’t have the best off-field resumes, but for me it’s about winning ballgames, not an image.

What do you specifically hate about Terry Collins?

In 2015 and 2016, although the team was able to overcome adversity and a bunch of injuries, I feel that the only real reason the Mets have made the playoffs the past tow seasons is because they beat up on the weak NL East teams in the month of September.

I was never a Terry Collins supporter because of his horrible in game decision making, the way he makes his everyday lineups as if he’s picking names out of a hat, and his constant misuse of the bullpen. His incompetence has cost the team at least 10 games each season. Over his tenure as manager, it seems like the players win in spite of him, not because of him. This season, the team looks uninspired to play baseball as if they’re forced to be on field.

Not only should Terry be fired for having the Mets who had World Series expectations in fourth place three months into the season, he should also be let go for how he has handled the clubhouse by letting the inmates run the asylum. Cespedes being allowed to take the field with a leg injury and Syndergaard tearing his lat because he refused to take an MRI are just a couple of key examples to why this man does not belong as a leader. It is no coincidence that once Houston and Anaheim fired Terry that they started winning, and I know that can happen with the Mets as well. They have too much talent to be playing this poorly. I know Lenny Dykstra would wholeheartedly agree with everything I am saying. Let’s not forget this is the same man who wanted to bench Conforto all season in favor of Granderson who might be the worst starting position player in the major leagues.

It is embarrassing that Terry Collins is the longest tenured manager in the history of this organization.

Has this changed your view of the team? Are you still a massive Mets fan?

I will still root for the team. I love my team and I will never stop rooting for them. But I have never been the biggest fan of ownership over the years but now that this situation has happened to me, I am honestly put in a bittersweet position where a part of me wants them to lost and fire this manager, but I do want to see them make the postseason, so I’m very conflicted.

The Wilpons, 100%. As long as the Wilpons are running the organization it will be difficult for everyone under them to do a good job. Just like the Knicks, and all these other dysfunctional organizations, the problems start at the top.

This entire story is proof that the Wilpons don’t care about the fans, and want us to put our hard-earned money in their Ponzi-scheming pockets. If Mets fans really want to see change they should stop going to games. I personally am not going to another Mets game until the Wilpons sell the team. Any fans who are intrigued by this story can follow my Instagram @thefireterrycollinsguy. 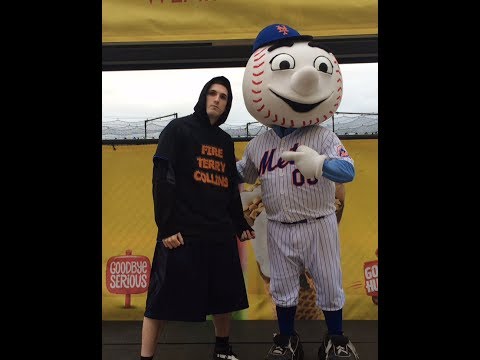