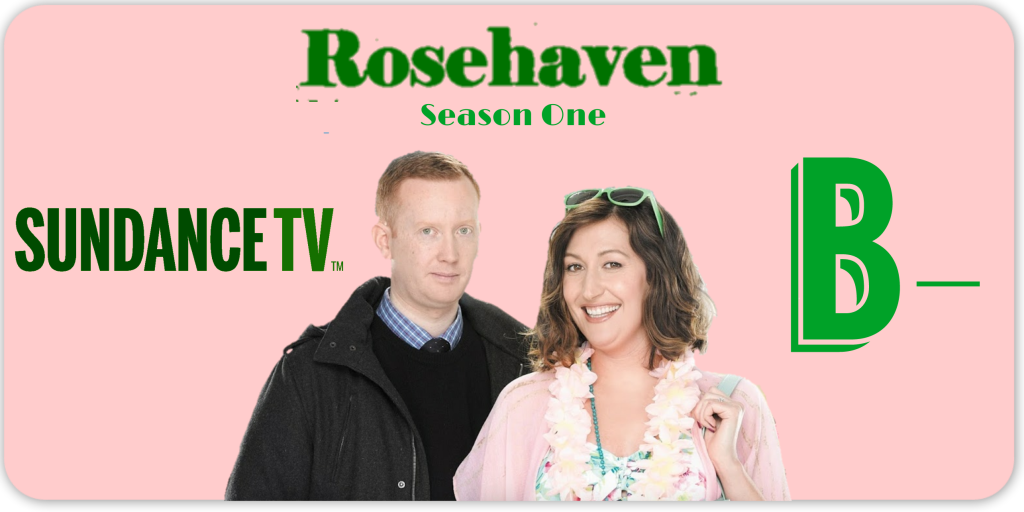 Rosehaven immediately struck me as funny, awkward with a very dry wit in its delivery. From the very beginning, there is excellent chemistry between Luke McGregor and Ceilia Pequola, the show’s writers and lead actors. You can tell they are very comfortable with each other’s delivery of lines and do well playing off of one another based on whatever situation they find themselves.

The story centers around Daniel McCallum returning back to his hometown of Rosehaven in Tasmania to help cover for his mother’s real estate business while she is on sick leave. His best friend who recently became married, Emma, decides while on her honeymoon to run away and join Daniel as he attempts to keep the business afloat. Beyond that, it’s your typical; one is playing it straight while the other is wild, free and unpredictable but it all seemingly works out in the end sort of comedy. Where the humor is best showcased in the show are in the little moments involving the townspeople as they interact with Daniel and Emma. There are also recurring jokes throughout that cause you to chuckle to yourself as you see them repeated in such a way where all you can do is laugh at the absurdity. For example, what turns out to be one of my favorite recurring jokes is simply the doorbell to the real estate agency. It has this sound as if a sad duck is being stepped on and at one point the townspeople all pile into the office and the bell rings upwards of ten or more times which plays out beautifully as you are forced to listen to it while focusing on Daniel and Emma’s deadpan faces. Subtle but very effective.

I recognize that Rosehaven is not only an acquired taste but will not be seen by many based on its release outlet. Not many people have nor search for SundanceTV and for this fact alone I know that I am one of not many people that will have seen and supported this show, however, that will not stop me from trumpeting its praises. Rosehaven is a show that is the epitome of an easy viewing, not requiring much from the viewer other than to just sit back and enjoy with the occasional rewind to hear what exactly someone was saying (Australian accent problems). Rosehaven is smart to quickly establish its premise and then move forward and focus on what truly matters in terms of comedy; character(s) and this show has them in spades. I found myself excited with each episode as to which quirky patron of the town Daniel and Emma would clash with next, but I always ended up coming back to my favorite which was the receptionist, Mrs. Marsh.

Rosehaven isn’t perfect, but it’s fun to watch. I would recommend it for a viewing if you have this available to you in any format and as it came to a close I was resigned to the fact that I will more than likely have no one else to talk about it with. There were some truly funny and heartwarming moments throughout the show, but you also get the feeling that this is McGregor and Pequola’s first step in establishing a fully formed comedic voice on television. They have been involved in various projects together, but this seems the type of show where they are learning and adapting as they go, which also feeds into the joy to watch as the show progresses.

I give Rosehaven a B-.