The handsome and hip Sebastian (Ebon Moss-Bachrach) is on a business trip to Tokyo. Clearly depressed by his marriage at home, he becomes fascinated with a woman he has seen at his hotel: Claire (Elisabeth Moss). Mysteriously, Claire and Sebastian keep running into each other, and romance ensues.

The only thing that keeps this short film remotely watchable is the cinematography. There are many beautiful shots of Japan, and director Richard Shepard really captured what it’s like for Americans in a foreign land. Unfortunately, literally every other aspect of this 30-minute story falls flat. From the acting to the writing, it’s all absolutely dreadful.

First off, the plot is incredibly cliche. This flaw might get a pass from some, but in a year where content like Master of None and The Big Sick are reinventing love story tropes, there’s no excuse why Tokyo Project goes for the classic ‘meet-cute’. (“Wow. We just keep running into each other!” one of the characters might as well say.)

A meandering story is dragged down even more by Ebon Moss-Bachrach’s canned performance. He plays Sebastian with absolutely no charisma whatsoever. Every line of the script reeks of pretentiousness. This film wants so badly to be deep and thought provoking.

It’s a shame that Elisabeth Moss attached herself to this project. She is currently one of, if not the, best television actresses. You can’t help but wonder how much better Tokyo Project would be if she was the lead, instead of relegated to the background.

As for the ending, there is a lame twist that is supposed to shock viewers, but it only makes you chuckle at how hard the writers were trying to make the final product “artsy”. Maybe the ending would work better if we had spent more than a half hour with the couple, but there won’t hear any clamoring for more Tokyo Project from me.

I give Tokyo Project a D. 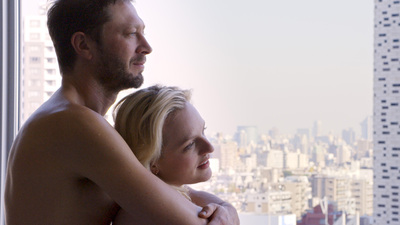