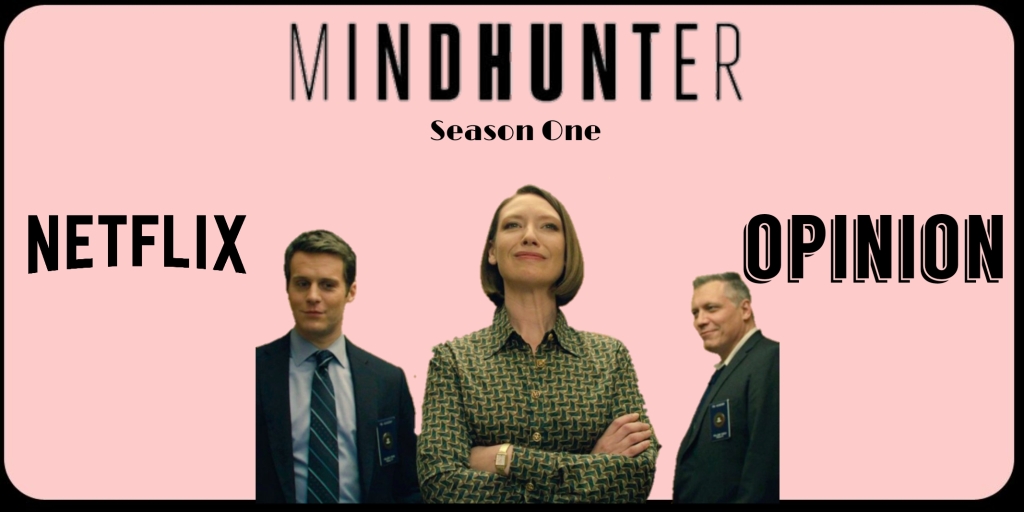 I’ve written about television I’ve liked in the past, but it’s a hard reach to say that a law enforcement thriller like Mindhunter has much of anything to do with the speculative genres that I normally write about on this site. That said, I was so fascinated by this show that I felt compelled to write about.

You wouldn’t have to be very observant or very original to note that there is a lot of great television on now. In fact, many of my favorite shows (which often tend to overlap, though not always, with critically well-received shows) are quite recent, including Star Wars Rebels, Bojack Horseman, Archer, Narcos, Longmire, Hap and Leonard, and Stranger Things. Mindhunter came out in the past month, and I’d already add it to the list of favorites.

In a nutshell, Mindhunter is a fictionalized version of the origination in the FBI of psychological profiling of serial killers. Immediately there are two hooks for me: (1) the first season provides long-form detective fiction, and (2) the show is as much period piece as it is police procedural.

As to point one, I’d compare Mindhunter most readily to Longmire, of all shows, because it follows a small ensemble cast of law enforcement agents (and those adjacent to law enforcement) over a broad narrative arc. Front and center are the characters; their arcs are just as important to the show as the crimes being investigated. The core cast is great: Jonathan Groff is Holden Ford, a frustrated and sensitive young FBI instructor whose ambition drives him down a bizarre path of investigation; Holt McCallany is Bill Tench, a reluctant and gruff mentor who begrudgingly finds value in interacting with people and researching crimes that repulse him; and Anna Torv is Dr. Wendy Carr, a psychologist who is tempted to abandon academia to help develop this important new research into the minds of serial killers.

Honestly, the above simply does not do justice to the actors or characters. They sound like types; you’ve seen those characters before. Of course Holden is the prodigy who goes too far. Of course Bill is the hard-as-nails experienced agent who finds he learns as much from his younger partner as his partner learns from him. Of course Wendy would be bored by the pretentious naval-gazing of her peers. But they’re all more layered than just that. Bill Tench in particular is fascinatingly layered; he initially seems to serve the role of foil, but the more we see of him, the more we realize that he is a full character in his own right and just as much a protagonist as Holden. He is a loving and devoted father and husband who finds tensions in his relationships despite his eloquence and ability to plainly state his emotional state. Bill is not simply the gruff cop. He is an agent in the Behavioral Science Unit; despite the Bureau’s resistance to psychology, he understands how people think, can recognize interpersonal problems, can recognize when he needs to take a step back from the emotionally distressing, and can communicate himself well. Without getting into too much, even Bill’s initially stereotyped overworked-cop-marriage-problems relationship is more nuanced, and he reaches an emotional epiphany with his wife and is able to grow even as Holden, who seems very sensitive and open to his girlfriend, falls into destructive patterns. Maybe I’m projecting more onto Bill’s character than is there, but I insist that my interpretation fits within the beats of the story. And on top of all the above, Bill and Holden just make really. Good. Partners.

I’m actually not familiar with any of the show’s actors, and yet I would once again point to Bill for greatness. Holt McCallany provides such a heartfelt, deep portrayal of the character that it is very easy to believe there is always more to Bill in any scene than what is happening at the surface. And yet Bill never feels dishonest, only appropriately reserved, knowing when to open up and when to close down.

Okay, enough about Bill. Not only do the actors do great work with their parts, but the dialogue is so snappy and clever that it propels otherwise quiet scenes along at a rocketing pace. And there is a lot of dialogue. The dialogue, the chilly yet saturated cinematography, and the stirring and often creepy music all combine to deliver a fantastic pseudo-neo-noir experience. In a way, this show is a movie told in ten parts. The first episode could be a turn-off to some, in the way it only slowly builds to triggering the serial killer interviews and investigations that will appear in the following episodes, but I loved that a full episode could be devoted to building the motivations of the characters and developing the inciting action. I was definitely more invested in what followed as a result.

Here’s the thing. I love police procedurals and detective fiction. As a kid, I would watch Columboand Poirot and Monk with my mom. While in high school and college, I watched way too much of the various Law and Order and CSI and NCIS shows. In addition to the detective shows I named at the top, I have a soft spot for Psych. And I’ve enjoyed many of Sir Arthur Conan Doyle’s stories about Sherlock Holmes and otherwise. But serial killers are too much for me. I’ve never been very comfortable with gore, and I’ve gotten more squeamish with age–I can’t watch The Walking Dead, and even though I loved the first couple Alien movies, I can’t bring myself to watch the most recent installment, for instance. But more than that, it is very, very difficult for me to sit through even stimulated instances of torture; I feel nauseated, tense and on edge, and distressed. And on top of all that, the serial killer is such an unsettling and scary breed of person, someone who not only fails to have a basic empathetic connection with others, who not only is incredibly good at faking emotions and using people and hiding, but someone who actually takes satisfaction out of the suffering and death of others. A show like Criminal Minds, though it has a pretty enjoyable lineup of characters in its ensemble cast, is something that I can’t really watch because of how it attempts to titillate through shocking depictions of violence and suffering.

I think Mindhunter takes a better tack. It can be shockingly macabre and graphically violent, through bleak crime scene photographs and brutally vivid testimony. But it never seems to delight in the grotesque. It gives these moments of horror they weight that they deserve. And it does not mire the viewer in that vileness constantly. It again and again returns to the characters, how they react and cope and change and interact. It might be a bizarre time to bring up another reference to Longmire, but here I sense another connection, in that both shows are willing to give weight to bad things, to define those bad things by how people react to them. Time is spent on the human element, rather than attempting to play up action sequences to make things seem “exciting.”

And the serial killers are truly chilling. We see different types. We are able to begin making categorizations even as the team does so on the show. And the stories are so clearly and logically told that I found myself having insights and epiphanies and making conclusions along with the investigators, often finding myself with the right answer just at or moments before a big reveal. Answers never felt obvious (to me) and always felt earned; the show never seemed to cheat by withholding critical information to the viewers, and it had a way of presenting information so that it could signal clues without bludgeoning you over the head with them (maybe a poor choice of words given the context).

By the way, if you watch the show and find that you too are fascinated by Big Ed Kemper, just look up any of the many interview clips with the actual Edmund online. It is eerie how authentically actor Cameron Britton brings that character to life. It’s hard not to find yourself sort of liking the guy until you are reminded yet again of the absolutely awful things that the man did.

If any of the above sounds interesting, I hope you’ll check the show out. And if you have seen it, let me know how you felt about it. What did you like? What didn’t you like? And doesn’t Holden at times seem like he could be a sociopath too?