Permanent is in select theaters and available on demand beginning December 15th.

Permanent gets it’s name from the hair style. See, this new comedy is all about hair. It’s 1982, and the Dixon family are newcomers to a southern town where all the girls long for Farrah Fawcett-like curls and obsess over their hair. Pre-teen Auriele begs her parents for a permanent (aka a “perm”), hoping for life-changing curly waves but when they take her to a Beauty School instead of a salon to save money, disaster ensues. A bored Student-Beautician accidentally sets the timer for too long, and the perm ends up destroying Aurelie’s already tragic social life. She is left as a gawky yet endearing young teenager trying to navigate junior high.

Despite being billed as a comedy, I laughed or chuckled exactly zero times during Permanent. It’s a shame this movie’s script is terrible, because the two adult leads, Rainn Wilson (The Office) and Patricia Arquette (Boyhood) really do give it their all. But even the best acting by award winners can’t save dreadful dialogue. Their talents are wasted on this project.

The movie also decides to throw in a couple of random subplots, with only one, about the lone African American student, paying off well. The rest of the storylines are meandering and boring. How this even get made? The director’s only other project, a 1999 comedy titled Coming Soon, holds a 29% on Rotten Tomatoes. Definitely skip Permanent; It’s not worth your time.

I give Permanent a D. 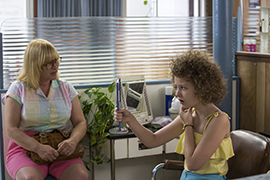