There’s certainly plenty of action in Gunpowder, but it’s always rather annoying when something combines dramatised fact with fiction and doesn’t explain what’s what. The series is a three-part thriller based on the 17th century events that led to Guy Fawkes Day.

The idea seemed to be a) to show things from the plotters’ point of view and b) to remind people that it was actually Robert Catesby, not Guy Fawkes, who masterminded the Gunpowder Plot. By a pleasing coincidence, Catesby is being played by Kit Harington, who is one of his direct descendants. (Although I’m not sure that the real Robert Catesby was quite as good-looking.) And the gist of it was that Catesby was radicalised, to use the modern expression, by the persecution of English Catholics, notably the torture and judicial murder of his aunt, Lady Dorothy Dibsdale. However, unless I’m missing something – in which case I apologise profusely to HBO! – Lady Dorothy never actually existed. Her niece, Anne Vaux, played in this by Liv Tyler certainly did, and there’s long been speculation connecting her with the Gunpowder Plot, but not Lady Dorothy. The horrific way in which Lady D was killed – being crushed to death – is well-known as having been the way in which Margaret Clitherow was killed, but it was very rare, and it was hard not to feel that the writers were deliberately sensationalising things.

Getting back to the point, most of the characters at court were genuine, and not figments of the showrunner’s imagination. I was impressed with the way they portrayed Cecil, but I thought they did James I a bit of an injustice. He isn’t known as “the wisest fool” for nothing: he was an extremely intelligent man. But Gunpowder made him seem rather naïve, wanting to act as a peacemaker. Well, yes, he did want to avoid trouble with either Catholics or Protestants, but he actually did rather a good job of it, marrying Charles off to Henrietta Maria, Elisabeth off to the Elector Palatine, staying out of the Thirty Years’ War and managing to avoid either too much trouble at home or, although there was some conflict with Spain, any really major trouble with other countries.

The discussions with James and his advisors were the only time that the program gave any real indication of the context in which all the action was going on. William Stanley was lurking around in the Low Countries, allegedly plotting trouble – although, if anything, the programme rather overplayed that. Yes, he’d plotted against Elizabeth, but he was getting a bit past it all and fed up with it all by the time James became king. And, even though Philip II was dead by this time, there was still a genuine fear in some quarters that Spain might send another Armada.

I don’t think Gunpowder really got across the genuine fright that many people felt about the fear of religious conflict at home, and what Catholics within England might do. There was a lot of religious tension all over the show. Of course, the vast majority of English Catholics just wanted to live in peace and practise their religion in peace, and Elizabeth would have been happy to let them do that, had it not been for other people stirring up trouble.

This show is going to grab headlines, because Bonfire Night was sensational – all that blood and guts and torture – and because Kit Harington’s in it. Good! It’s always good when anything historical grabs headlines! And maybe it’ll remind people to pay a bit more attention to Bonfire Night and a bit less to all those ridiculous fake spiders and so on that now fill the shops for weeks on end at this time of year! Now that really would be good. Bonfire Night’s important. It is, after all, about a terrorist attack being foiled. And that’s a hell of a lot more important than silly fake spiders and knocking on doors asking for sweets. 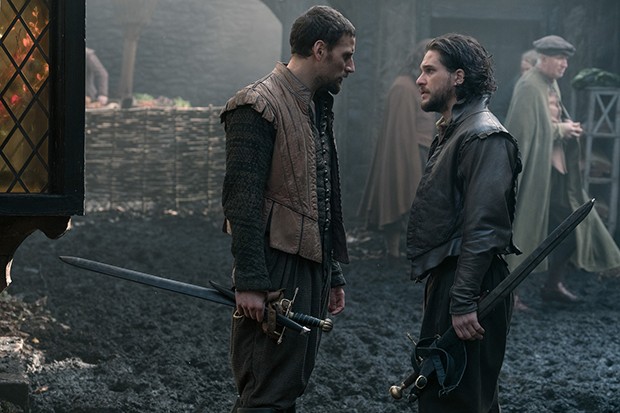