Who knew that the breakout star in a workplace comedy taking place almost entirely inside an airplane would be Dylan McDermott’s mustache?

I certainly wasn’t counting on it, but I was very quick to accept it.

Within its title, LA to Vegas pretty much sums up what the show is about; the Friday night and Sunday evening flights to and from Las Vegas from LAX and features the many oddballs and weirdos that make the trip for various reasons. The premise is peculiar, but eerily contains a awareness that’s grounded in reality; the idea that there is in fact a group of people that board a plane every Friday with dreams of finding love, returning rich, famous or all of the above. On that pitch alone, I was hooked immediately.

Normally, workplace comedies take a bit to become truly funny, by choosing to ease the audience into its vision of humor, but LA to Vegas wastes no time in being funny by allowing the passengers to be the standout stars and drive the jokes while letting the main character(s) be the “normal” ones that interact with them. This approach works well because as you begin to understand the characters on the plane you can almost directly identify with having sat near or next to at least one type of passenger from the show.

Which leads me to McDermott. I admit that when he first showed up on screen I just thought his character, Captain Dave, was merely McDermott doing a favor as a bit role for the show’s producers, Will Ferrell and Adam McKay, but the more he appears on screen the more I paid attention to his character and realized that he almost always had the best and funniest lines. How did I come to this realization? I couldn’t look away from his mustache. I kid you not, the little bit of facial hair he sported made his delivery that much more hilarious. That and the fact that even though he was playing an airline captain I still couldn’t shake the vision of him as the father from season one of American Horror Story hitting on unsuspecting female passengers and attempting to impress others by stories of how he learned and now teaches Krav Maga. We all have that stereotypical image of an airline captain and McDermott’s version was exactly the person you would expect to pilot the LAX to Vegas flight. He was my favorite part of the entire episode.

In the end, I found myself laughing very loudly throughout LA to Vegas. I enjoyed getting to know the diverse group of people within the show and came away excited and happy about viewing more episodes once it airs. LA to Vegas‘ key in success will come down to how it’s marketed and promoted by FOX. It’s worth your time to at least watch the first episode, but I also recognize how this version of comedy might not be for everyone. I believe that if allowed to grow properly, LA to Vegas, while funny, will only become better through time and I’m anxious to see how it is handled once it premieres. Now if they could only go and pick a better title… 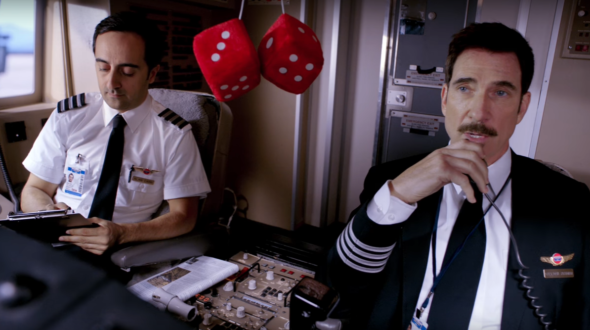