I recently diagnosed myself with TCF – Trump Comedy Fatigue. It’s a condition brought about by the 24-hour news cycle, a constant stream of terrible headlines clogging your Twitter feed. Yes, I despise the 45th President of the United States and everything he stands for, but it’s for precisely that reason that it’s hard to laugh at him. Late night talk shows seem to repeat the same barbs over and over again, and even when their hosts do have important commentary, I don’t want to laugh at what’s going on. Don’t take that as a suggestion to cower in fear, but realize that the current administration is orchestrating attacks on the pillars of our democracy.

Stephen Colbert’s latest project is an animated sitcom for Showtime about Donald Trump and his cohorts in the White House. What might have been a novel concept in another era falls a bit flat now. Comedy Central’s The President Show is a much better take on Donald’s personality, putting him behind the desk of his own talk show. Showtime’s Our Cartoon President feels like Family Guy with POTUS in the Peter Griffin role. While by no means humanizing him, the series goes after his traits (Spray tan! Long tie! Narcissistic!) rather than lampoon the damage he’s doing. In today’s current climate, that makes for subpar satire.

Weirdly, every other character besides Donald is brutally made into an unflattering caricature. Melania, Mike Pence, Ivanka & Jared, and the entire cabinet provide funny material. Stephen Miller depiction in particular is quite savage. So why do the writers go easy on Trump himself? Perhaps they are trying to court as many viewers as possible, but I guarantee the MAGA crowd has already written off watching this show.

It doesn’t help that due to the animation aspect of Our Cartoon President, the writers don’t have time to work current references into the plot. The premiere focuses on Trump’s first State of the Union speech, but with jokes that could have been written at any point throughout the last year. The second episode gives viewers an idea of how Our Cartoon President aims to navigate parody without timeliness. That half hour is a story out of any sitcom – a character hires impersonators to do his/her jobs – tailored to fit the leader of the free world.

Without a doubt, the best part of Cartoon President is the stellar animation. Each character is well-defined, and if you follow even a tad of current events you can spot characters like Betsy DeVos in the background.

Ultimately, I suggest watching the show for yourself before you form an opinion on it.

I give Our Cartoon President a C+. 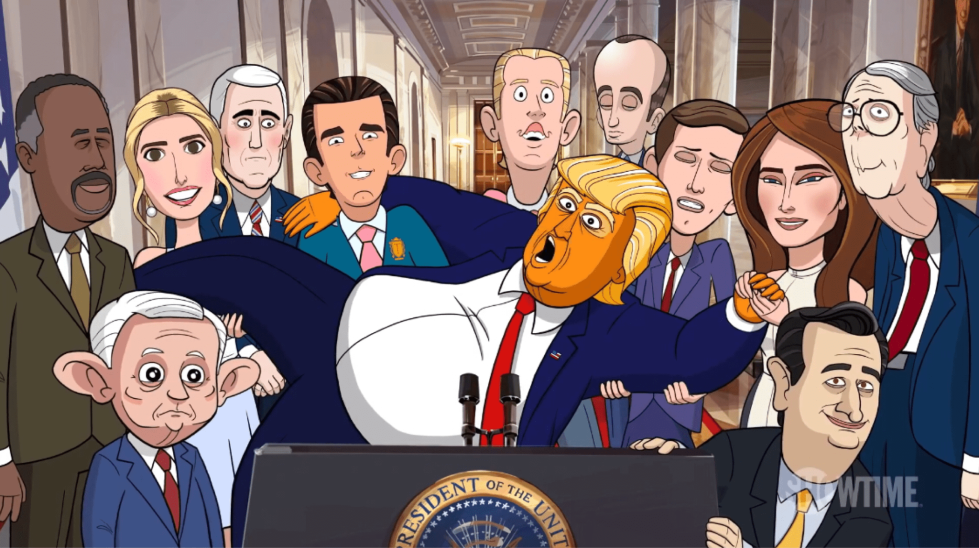