Evil has been defeated, Ash Williams has opened a hardware/sex emporium in his hometown, Pablo runs a taco truck out front, and Kelly is running a bar while serving as its de facto bouncer. Life is good and normal, right? Not so fast, my friends.

Season 3 of Ash vs. the Evil Dead opens with the gang in various stages of “normal,” but it isn’t long before the evil they all thought had been vanquished shows up for a third go-round. And with it, the body parts start dropping, the blood spill tallies in the hundreds of gallons, and the band is forced back together to try and stem the deadite tide.
It’s everything you could wish for.

Ashy-Slashy’s foray into private enterprise doesn’t last very long as the opening episode reveals that the Necronomicon has been found. An unsuspecting young lady has discovered the book and taken it to an Antiques Roadshow type event in an old barn. The appraiser, recognizing the language as ancient Samarian, starts to read from the book.

Well, you know where those few brief moments are going to take us, don’t you. If you’re a fan of the show, the anticipation of blood, gore and Ash’s awkward sexual innuendo don’t take long to manifest themselves across the screen.

Ash is quintessentially, Ash. And season 3 does little to slow his unique roll.

This season, there’s a couple of twists.

Ruby is back, sporting an all-white ensemble, including a platinum blonde hairstyle that’s not only dynamite, but accents the blood she’ll wade through during the season rather nicely. Ruby spends season 3 looking to destroy Ash. She gets her hands on the Necronomicon and through her dark magic does a little DNA shifting with the help of the book, creating a surrogate Ash-infused baby – with a lust for body parts and very sharp teeth.

Yes, family is a huge part of season 3 of Ash vs. the Evil Dead, and Ruby’s abominable Ash baby isn’t the only familial twist. Turns out, Ash has a daughter.

A hot weekend of sex, drugs and more sex, along with a quickie Vegas wedding, left Ash with not only a wife, but a daughter. Years later, Candy Bar shows up in front of Ash’s hardware hangout to inform him of their marriage and his now-teenage daughter, Brandy. While mom doesn’t last long, Ash is left with a moody, angry and distrustful teenager in whom Ruby tries valiantly to get her hooks into.

Bless him, Ash, tries to take on fatherly duties, but you know it’s gonna be weird and just a little unorthodox most of the time. It’s the Ash Williams way.

There’s also the introduction of a secret society known as the Knights of Samaria, who have been fighting this evil for centuries. Again, the survival rate isn’t that impressive.
With Pablo, Kelly, Ash and plenty of deadites to deal with, season 3 of Ash vs. the Evil Dead offers another go-round filled with the type of Ash-speak, blood and disgusting permutations of creatures that fans have come to adore about the show. It’s safe to say that the new twists and turns in the show may send it off in interesting directions, but at its core Ash vs. the Evil Dead is still about dealing with disgusting evil on a physical level. Chainsaw on hand, boomstick at the ready, and a libido that seems to never shut off, Ash Williams once again hits the trail in search of a way to stem the tide of evil once and for all.

The addition of Ash’s daughter is a nice little twist as he comes to grips with his upbringing and sad attempts at parenting on his part. Ash tries, bless his deadite-killing heart, but at his core he’s still Ash Williams and that doesn’t change. So, Brandy does what the rest of the crew have learned to do – focus on those small specks of hope within the massive canyon of hopelessness that is Ash as a human being.

It’s Ruby against our heroes in another titanic battle of good versus evil. Let the blood flow, the inappropriate comments commence and the sheer joy of bloody retribution take hold as Ash, Pablo, Kelly and Brandy fight evil the only way they know how – badly, but with lots of enthusiasm. 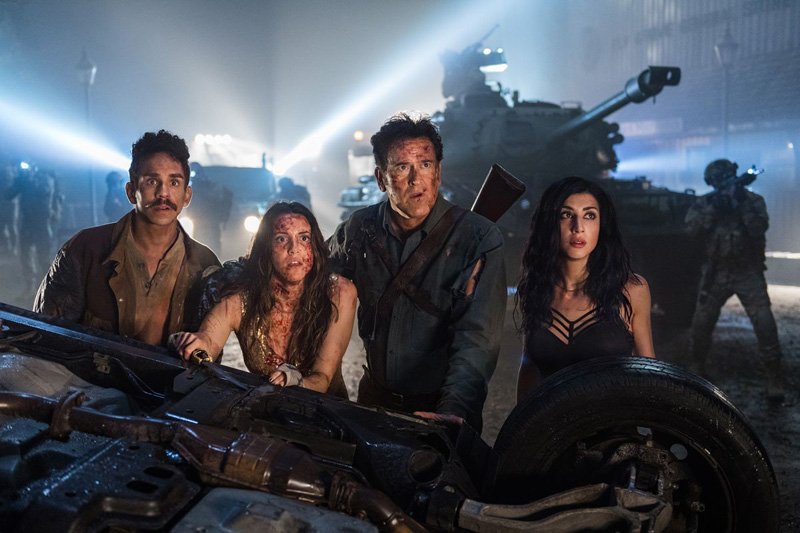