For the People premieres March 13th, 10pm on ABC.

From Shondaland, which are two words that should be all the indication you need to determine whether or not you’ll tune in weekly, For the People focuses on the lives and careers of lawyers representing both the prosecution and the defense in the Southern District Court of New York.

If you’re familiar with Shonda Rhimes’ other shows (Scandal, Grey’s Anatomy), then you already know how this show will look and feel and I can say with confidence that the show’s creator did little by way of changing the format of what has previously been successful. All of the Shonda boxes are checked in For the People; Unidentifiable and highly successful twenty-somethings. Check. Large problems that gloss over real-life consequences. Check. Pretty people with pretty problems. Check. and one cannot forget the stereotypes that define each lawyer: the nerdy one, the cold-hearted one, the privileged one, the heart-on-the-sleeve one, the got-to-prove-it one and more! They are all here so don’t fear.

Despite all of these mediocre tropes that are poorly written for TV, I actually enjoyed watching For the People. Over the five episodes I was able to watch, the show was able to quickly find the right voice and pacing that enabled each character to begin the early steps of developing into someone else. The groundwork was there for a decent show, albeit one that will more than likely not make my weekly watch calendar, however, that is not to say there are not things within this show that aren’t good. The cast is well-rounded and given various storylines that allow them to shine. The pacing is quick and while sometimes that hinders the story it can be necessary when having to glorify the world of being a prosecutor or public defender. If that were true to form, one case would take multiple seasons and that is just not how Shondaland works. With that, I feel the show suffers slightly because having some of these cases quickly wrapped up by the end of the episode feels like cheating in a way and does something to diminish the growth of the characters.

For the People does have its flaws. As previously mentioned, the characters are predictably written to the point where it almost seems as if the writers aren’t trying to change but are rather satisfied with taking the exact same people that have been a part of their other successful shows and copying and pasting them into this courtroom drama. I understand the If it’s not broke, don’t fix it approach but I just felt that they could’ve done something different with the characters from the beginning. That being said, the stories themselves are prevented from being truly compelling or great due to a lack of time to adequately tell them. Everything is neatly wrapped up by the end of the episode with all of the characters having learned a valuable lesson just in the nick of time.

And still, I found myself at least being mildly entertained by For the People. Despite the characters not being the best they can be, they still are fun to watch at times and engage in interesting dialogue that keeps you intrigued as to how it will all be concluded by episode’s end. As the season progressed, there were better stories being developed and more relationship dynamics that will become interesting as the show continues but for now we are left to hope and wonder.

For the People is predictable at best but that doesn’t keep it from being semi-entertaining. While the characters and stories aren’t the most compelling, they still find a way to keep you hanging around until the end just to see how things finish and what may lie ahead. For the People won’t be on anyone’s best TV lists and will more than likely not find its way onto my weekly watch routine, however, for the episodes I managed to see I didn’t mind them. If you are already a fan of Scandal and Grey’s Anatomy, then this is a must-watch, but if you sour on the mere mention of those shows you might want to look elsewhere.

I give For the People a C+. 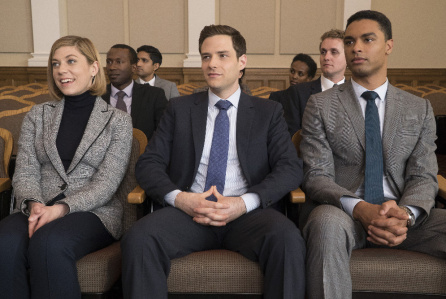