To Dust is playing at the 2018 Tribeca Film Festival. Find screening information HERE.

The film To Dust leaves us with more questions than answers as it cleverly deals with issues of death and the afterlife. While the film seems to imply that the main character has achieved resolution and is able to move on, viewers are left with many unresolved feelings. Perhaps that’s exactly what writer/director Shawn Snyder was striving for in this dark comedy.

The film opens with the untimely death of Shmuel’s (Geza Rohrig) wife, Rivkah. He immediately becomes troubled by questions surrounding the decomposition of her body and what happens to her until her physical being is returned to dust. Unable to find satisfying answers within his Hasidic community, Shmuel begins a scientific inquiry with the help of Albert, a community college biology professor (Matthew Broderick), who is really only one step ahead of Shmuel in researching the forensics. This odd couple embarks on a series of scientific experiments, both horrific and humorous, to try and approximate the disintegration of Rivkah’s body.

A very realistic depiction of bereavement and mourning is wonderfully captured by Snyder’s script and Rohrig’s performance. It was heartening to see a Hasidic man portrayed as so deeply loving his wife. In one scene, after being encouraged by his mother to begin to clean out Rivkah’s closet, Shmuel caresses Rivkah’s clothing and sheitl (wig) as if she is still alive. Shmuel is haunted by nightmares of Rivkah corpse decaying, but he is most troubled by thoughts that she is suffering as a “lost soul.”

The seriousness of loss is balanced by the antics of Shmuel and Albert. Each must learn a little about the other’s way of life, which provides for many comedic interactions. They also clandestinely act as undertakers for a pig that they bury for comparison purposes. Broderick’s character is almost carried away in Shmuel’s quest, feeling compassion for his grief, while at a loss to really help him.

Shmuel’s two sons struggle to deal with their father’s consuming grief and inattentiveness (they have no idea of his work with Albert) and begin to believe, influenced by community rumors, that he has a dybbuk of Rivkah inside him. A dybbuk is a malicious possessing spirit thought to be the dislocated soul of a dead person, and the boys attempt an exorcism while Shmuel is sleeping, providing for some comedic relief.

All the humor in To Dust only masks the true feelings of sorrow that surround the loss of a loved one. Snyder does a good job of walking the line between the two and leaving the audience just unsettled enough to have a fulfilling viewing experience. Geza Rohrig carries this film with an authentic, moving portrayal. One cannot helped but be swept up alongside Albert in hoping Shmuel will find the answers he is searching for. 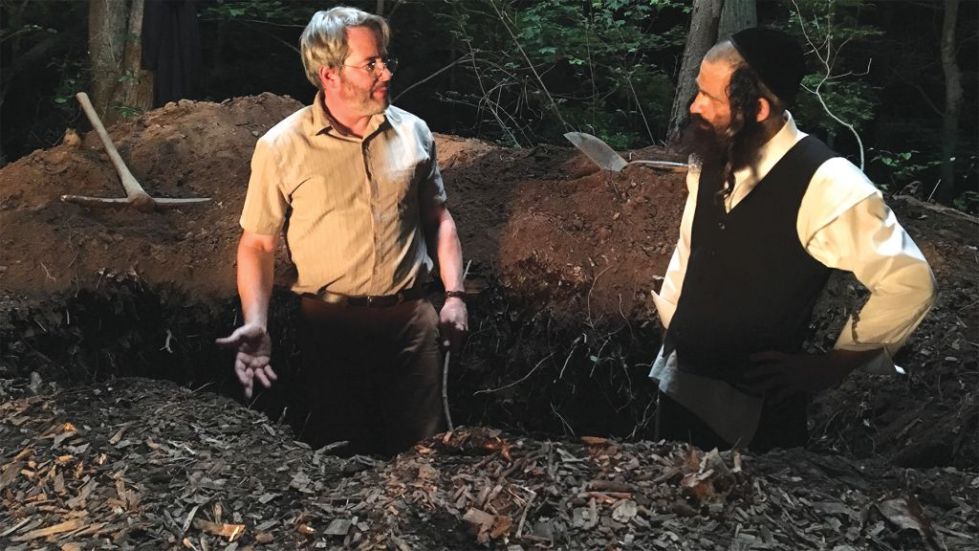