When Cobra Kai was first announced I must admit that it didn’t really pique my interest. The thought of rehashing the storylines of LaRusso and Lawrence post-Karate Kid felt unnecessary and weirdly nostalgic, but not in a good way. That story was completed so why then should we seek to revisit it once more? Then a trailer was released and caught enough of my attention to get me to tentatively watch. Surprisingly, the result was a show that manages to provide a much deeper narrative than I expected and told a story that actually had me wanting to see more by the end of the episodes I had seen.

Cobra Kai follows the lives of both Danny LaRusso and Johnny Lawrence well into their forties. Both have lived very different lives from each other with LaRusso continuing down the path of the hero and having a prosperous business with a great family who seemingly has it all figured out. While Lawrence, after the events of The Karate Kid (and the beginning of the sequel), has never been able to outgrow or overcome the boy left beaten in the parking lot of the All Valley Karate Tournament. It clearly has affected every aspect of his life, both social and professional, and has caused him to fully resign living underneath the giant cloud that has been looming over him ever since that day.

Sadly, the show’s first episode wastes much of its runtime hammering home this fact by continually putting Johnny in situations where he is not only knocked down by those around him but also kicked repeatedly. I understood this choice was to make a point for his character and to ultimately lead him to a breaking point that would serve as the crux for the show with him re-opening a Cobra Kai dojo of his own, however, it became a redundant trope in the episode and lead to me wanting to skip ahead. Where the show took an unexpected turn was in its depiction of Daniel LaRusso. From the outside, LaRusso appears to have everything in order in his life but as the show progresses you begin to see his failings as a father towards his kids and his inability to also escape the past despite coming out the victor. Often times, those around him are forced to listen to the stories we are already very familiar with as they serve as a type of crutch keeping Daniel from completely coming apart. You get the sense that he has used his victories to coast through life without ever truly having to face hardship and now when problems are pressing in he’s left with uncertainty in how to handle them. This was an interesting take on his character and one that I found to be one of my favorites in the show with the other being just how misunderstood Johnny Lawrence was after the events of The Karate Kid.

I was impressed with the direction of Cobra Kai not only from what I have already seen but also for the potential with where it plans to go with both Lawrence, as he begins to find his confidence in himself again and LaRusso, as the insulation he’s built throughout his life begins to slowly crumble. The show manages to make these character’s stories tangible where you find yourself rooting for both of them despite being at odds with one another. As a viewer, it forced me to reevaluate just how I had originally seen Lawrence and to also apply that same thought to LaRusso which is something I never thought possible with a story that had been told.

Overall, I was not expecting much from Cobra Kai as a show that would not only keep my interest in what was available to me but also be moving forward from episode to episode. What I received was a well thought out narrative that felt relevant with its focus on two men whose lives were majorly defined by an altercation between each other leaving both completely different people. After watching the first couple of episodes, I wanted to see more and to know just how the two main character’s journeys would be resolved and became excited with anticipation for what is to come. Cobra Kai is easily worth a watch. It isn’t too demanding and surprisingly keeps the viewer engaged throughout its story. The downfall is that it is only available on Youtube Red, a service I do not currently have, which might hurt its chances in others finding it. 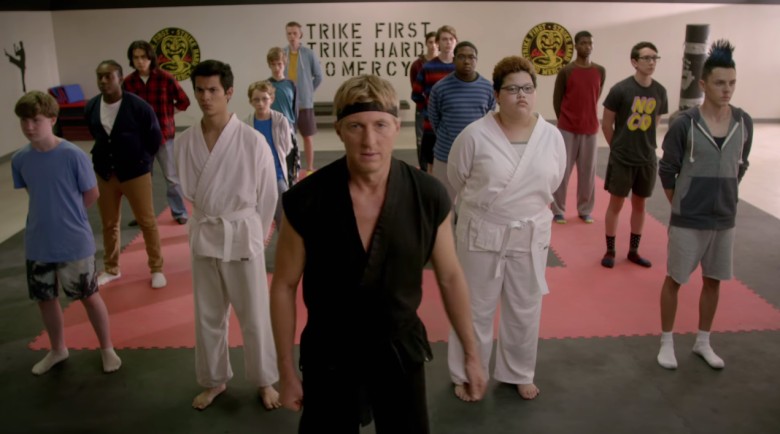 [Visit Critics Without Credentials for more of my writing!]