The stand-up special Warn Your Relatives is available to stream on Netflix.

To get an idea of how dense Hari Kondabolu’s Warn Your Relatives is – make sure you keep the opening visual gag in mind until damn near the end of the special. Kondabolu arrives at the venue with a toy crown atop his head and a bicycle driver that looks like Shia LaBeouf after a perm. On a surface level, it’s just another example of a comedian taking the piss out of themselves and good for a smile. With a bit of history, it’s an inversion of the British oppression of India and sets up an amazing punchline about what accent Kondabolu is uninterested in hearing under duress.

If you only know Kondabolu from his appearances on Totally Biased with W. Kamau Bell or his standup bits then you’ll enjoy the special. The bigger appeal for me lay in the beautiful talk he had with bell hooks in 2016. There are genuinely tender moments in that conversation where Kondabolu and bell hooks connect over a shared weariness about their status in the United States along with the comforts of their respective faiths. That’s the Kondabolu I saw in Warn Your Relatives, and that’s exactly why all of this special has superglued itself to my brain.

Yes, Warn Your Relatives is funny, but I wanted to be clear about what kind of funny it is and why I’ve responded to it so strongly. This isn’t a standup set where punchline after punchline comes soaring in to leave me breathless. It’s the kind of standup where Kondabolu dangles right on the edge for minutes at a time getting chuckles from the crowd. Once he has a bead on what’s going to land the hardest, he leans in completely and delivers some relentless observations that had me rolling.

He’s not so focused on his material that he forgets he’s talking to other humans, taking a break to high-five two Sikh practitioners in the crowd. That’s a positive humanizing moment, shortly followed by what may be my favorite turnaround where a joke about suicide bombing doesn’t go as well as expected so he takes it to its appropriate conclusion. The big trick is that he’s not disdainful of the reaction. Instead, he redirects the crowd’s unusually placed sympathy back onto them. It’s a big risk that pays off wonderfully.

Kondabolu’s humanism comes full flower while relating to our collective alienation. There’s a bit about airport security that takes an unexpected detour into a tender observation where lost people are perfect targets for toddler-sized Illuminati candy. It’s not a “hurr hurr Americans eat a lot” bit (though I bet he’d land a punchline on that too) but a recognition of how our capitalist overlords have constructed a bewildering travel maze that makes unreasonable purchases seem like the only logical thing to do. This is the kind of comedy that speaks to me.

The same can be said of the pointed jokes toward a more specific target – white liberals. My notes at this point are a combination of misspellings because of my laughter and constant need to write “hell yes”. This takes up a huge chunk of the last part of Warn Your Relatives and has Kondabolu’s sharpest material with the comedic high point his insistence that liberals do something useful with their safety pins. What really got to me was his call, “we need John Brown white people”, which may not be as catchy as the Parkland students’ “We call BS”, but is a sentiment I can both get behind and might give me the energy to grow a beard.

Warn Your Relatives’ only stumbling point lies not in Kondabolu’s routine but in the presentation. This was a bit of a disappointment as the director, Bobcat Goldthwait, is a good comedian on his own merit and has directed some great stuff (World’s Greatest Dad is excellent). There are way too many moments where Goldthwait cuts back to a wide shot when Kondabolu’s expressions are a big chunk of why his comedy works so well. The editing, by Alan Lowe, is also distractingly choppy with a lot of jumps from Kondabolu pacing to closeups of an exaggerated pose. It’s the sort of thing where an album version of the same material would probably play more smoothly but when it is spot-on, like Kondabolu’s expressions during the John Brown segment, I wouldn’t trade the uneven presentation for anything.

Minor visual flaws aside, I hope that Warn Your Relatives and The Problem With Apu (which I haven’t reviewed as of yet and will fix shortly) broaden the audience for Kondabolu’s sharp humanism. There’s this misguided notion that progressive attitudes need to be laid back in their “tolerance” of bigotry and ineffectual liberals. The Kondabolu we see on display is a near perfect mesh of the warmth he showed in that conversation with bell hooks and the rage on display in Totally Biased. We’re not too far apart in age, so here’s to hoping his tempered optimism becomes the norm and not the exception. 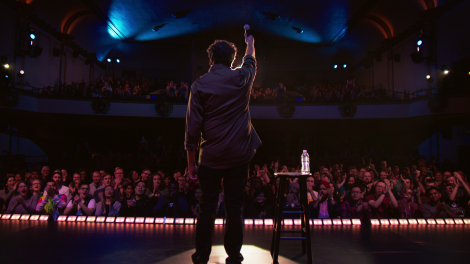 [Visit Can’t Stop The Movies for more of my writing!]