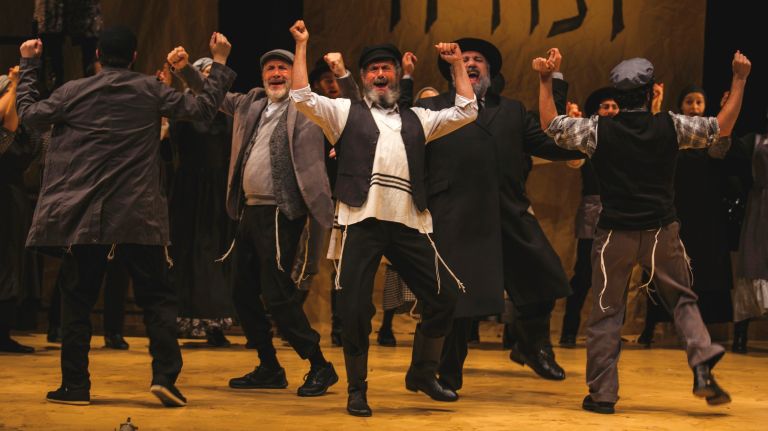 Most fans of Fiddler on the Roof think of Zero Mostel or Topol when they remember Tevye the milkman. The iconic songs by Sheldon Harnick and Kerry Bock have stood the test of time. Interestingly, this summer, two new adaptations of the Tevye tale, both harkening back to the original stories of Sholem Aleichem, are playing in New York.

The first, Fiddler on the Roof in Yiddish, by the National Yiddish Theatre Folksbiene, is the Yiddish translation of the original Broadway musical, written by Shraga Friedman in 1965. While it has been performed in Israel, this production marks the US premiere. Directed by Joel Grey, the cast does a wonderful job of balancing the humor and despondency of Anatevka’s Jews. The choreography by Stas Kmeic, especially well executed on the fairly small stage at the Museum of Jewish Heritage in Battery Park, was outstanding. The four women that play Golde, Tevye’s wife (Mary Illes), and his three oldest daughters, Tsaytl, Hodel, and Khave, (Rachel Zatcoff, Stephanie Lynne Mason, and Rosie Jo Neddy) carry the show. They have lovely voices and did an excellent job acting in Yiddish.

The show suffers slightly from the fact that (as reported in The New York Post) neither Grey nor all but three of its cast knew much Yiddish when they started. They used English scripts with the dialogue and song lyrics spelled out phonetically. Sometimes the Yiddish inflection is off, or the emphasis seems to be put on the wrong part of the sentence. Overall, since the script sticks closely to the original, the dialogue is easy to follow, especially with the supertitle translation in English and Russian.

Steven Skybell portrays Tevye’s dilemmas genuinely: how far can a parent stretch to make their child happy, how come God has decreed that Tevye live in poverty and why is there anti-Semitism? One can’t help but be sympathetic to his plight, while also sharing in his delight when he has naches (satisfaction) from his family. Tevye in Yiddish feels authentic – just as Sholem Aleichem wrote him.

Also playing now, through August 14th, at The Playroom Theater, is Tevye Served Raw (with the Tevye stories they left out of the musical). Trying to balance the melancholy and wit of Sholem Aleichem’s work, the three-person cast performs revisions of his ‘Tevye’ stories (“What, Me Worthy?” and “Get Thee Gone!”), and three of his purely comedic stories, newly adapted (“Strange Jews on a Train,” “The Yiddish Sisyphus” and “A Stepmother’s Trash-Talk”). The production stars Allen Lewis Rickman, Yelena Shmulenson (the Yiddish-speaking couple from the Coen brothers’ A Serious Man) and Shane Baker. Some scenes are performed in English and Yiddish (translation becomes a humorous part of the show) and some with English supertitles.

This Tevye doesn’t have a “lighter side” and is more in line with the original written story. Tevye is a tragic figure according to Sholem Aleichem, excellently rendered by Rickman, and well-supported by Shmulenson as both his wife and his daughter. The stories portray Jewish life in early 20th century Russia.

These cast members are all authentic speakers of Yiddish, and it shows. They can focus on well-oiled delivery of the comedic routines and exaggeration and intonation. Watching the three was a pleasure throughout the 80-minute show. Their facial expressions and their ability to improvise as they interact with the audience were wonderful.

If you are a rich man (a Rothschild in the Folksbiene version) {or woman} go see both – you’ll be glad you did!