Disenchantment is Matt Groening’s first foray into the streaming service pool, and if the first few episodes are any indication of what lies ahead, fans have reason to be excited.

Groening, most notable for The Simpsons and Futurama, settles into familiar animation territory with Disenchantment which follows the characters of Bean, Luci, and Elfo. Bean (Abbi Jacobson) is a princess being forced into marriage to preserve an alliance with another kingdom at her father’s mandate, but she has no interest in going through with the union. Instead, Bean chooses to run. Once free, she meets Elfo, a sheltered elf who is tired of living the overly joyous life of his people and decides to leave for the real world in search of sadness, disappointment, and pain. They are also joined by Luci, a demon who was gifted to Bean on her wedding day to plague her remaining days, comically of course. The show wastes no time introducing the heroes to one another and sets them on their adventures which seem to revolve around them leaving the kingdom.

The bottom line: Disenchantment is entertaining and incredibly hilarious. Both long-form jokes and snappy one-liners are peppered throughout each episode where just as you stop laughing from one joke another is right behind it. From the first minute, you can see Groening’s signature dry wit on full display and is a clear testament to his perfect voice and storytelling ability from his previous works. The story, while grounded in fantasy, feels fresh and keeps you guessing what will come next and offers a fun universe in which the characters get to explore and will only continue to grow with each passing episode.

After only watching two episodes, I can say with confidence that Disenchantment needs to be added to your Netflix Watch List. For me, it just took five minutes to be completely hooked as well as one specific character, Elfo. The portions featuring Elfo and his world are some of the best aspects of the show, and it felt as if no joke was fully complete until he was able to attribute a one-liner towards it. What I enjoyed most about Disenchantment, besides its humor, is its ability to create a world in which the characters, both leading and supporting, are interesting and keep your attention. It’s apparent that the central trio’s character arcs are going to be fantastic to watch as the season progresses and I’m already looking forward to what lies ahead for this show. Even more exciting is that I believe the binge-watch format will only help this show succeed further because as each episode ends, you will immediately want to stay connected and see what comes next.

I give Disenchantment an A+. 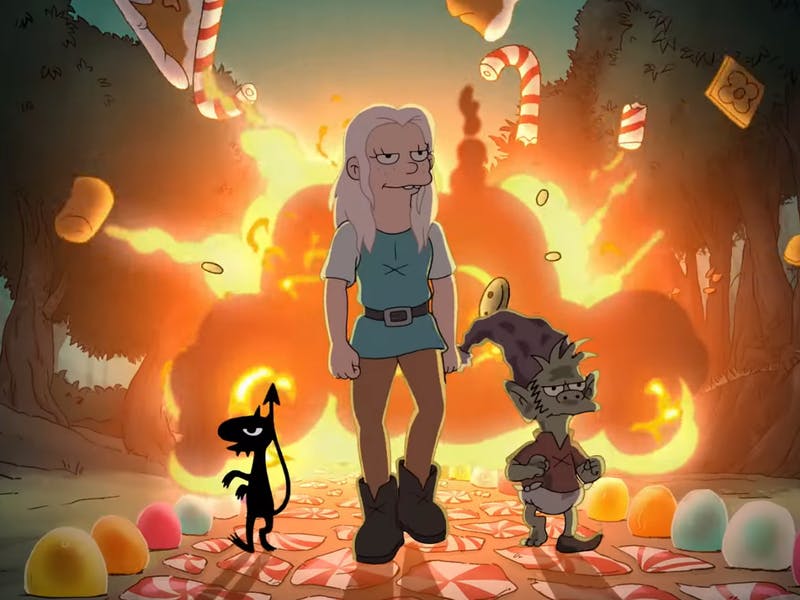