On the Upper East Side of NYC sits a lesser known, but fascinating, museum. The Museum of American Illustration at the Society of Illustrators was established in 1981. Their permanent collection houses 2,500 pieces. Since 2012, the museum houses the MoCCA Gallery with a focus on curated exhibits of comic and cartoon art. Founded in 1901, the Society of Illustrators is the oldest nonprofit organization dedicated to the art of illustration in America. It is Manhattan’s single cultural institution promoting all genres of illustration.

Currently showing is “The Art of the Avengers and Other Heroes,” highlighting original artwork with characters from the Marvel Universe. Artists include John Buscema, John Cassaday, Don Heck, Joe Jusko, Jack Kirby, George Perez, John Romita, Marie Severin, Walt Simonson, Barry Windsor Smith, Jim Steranko, Herbe Trimpe, and Steve Ditko, the co-creator of Spider-Man who recently passed away. The exhibition is the most extensive selection of vintage and modern original Marvel art that has ever been displayed in the world and includes comic artwork (most in black and white) from all years of Marvel Comics history. The selections demonstrate how Marvel’s creative teams, led by legendary creators Stan Lee and Jack Kirby, kept the Marvel Universe changing with the times.

It was inspiring to see how much hard work goes into every page of a comic. Each is penciled and then inked by hand (including the lettering). Many sheets have whited out areas that are corrected over. Even in the age of computers, comics are a paper and pen outfit.

Upstairs, in a long hallway painted red to offset the collection of black and white drawings, hangs “Funny Ladies at The New Yorker: Cartoonists Then and Now.” According to Liza Donnelly, curator and New Yorker cartoonist, the “exhibition is a commemoration of some of the women who drew cartoons for The New Yorker past and present. It’s a celebration of their creativity and fortitude as they pushed past cultural stereotypes to create humor and offer the world laughter from all points of view.”

The display chronicles The New Yorker’s female cartoonists, since the first (Ethel Plummer) appeared in the premiere issue, on February 21, 1925. Each artist is represented with two or three pieces. They provide a window into women’s perspective on issues of the day. Each with a different style, the retrospective allows viewers to find themselves and their own memories in the exhibition.

The museum generally has three concurrent exhibits. Currently also showing (but only through September 1) is American Patriots: The Tuskegee Airmen and The Harlem Hellfighters. Funny Ladies is up through October 13, and The Avengers is on display through October 20, 2018. More information can be found here: 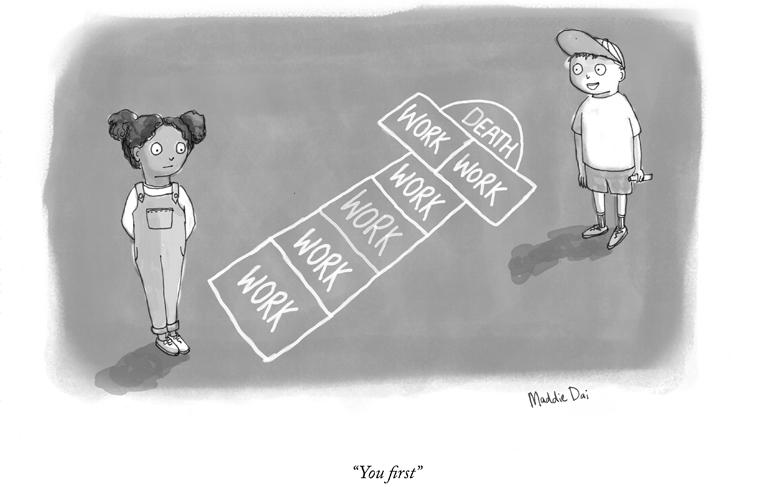