In its rollout, Sharp Objects was sold as a murder mystery. Two girls had been murdered and Amy Adams was a reporter, sent home to investigate. Let’s go. Guys, it’s like Big Little Lies, but with less lush northern California greenery and beach-front views.

In the end though, the murder mystery and the trials and tribulations of Camille became joined at the hip. The murderer wasn’t that one gal’s brother and it wasn’t that one gal’s Dad. It wasn’t roller skates, vodka or small town boredom. The call was coming from inside the house Camille and the phone had been ringing for years.

Or had it? It took until the very end of the finale for it to be revealed that yes, a Crellin girl had been the one who killed those two girls. But hold up. It wasn’t the one you thought it was.

Adora definitely killed Camille’s sister Marian back in the day, but she hadn’t been the one to kill the two dead Wind Gap girls. Cared for them? Yes. But killed them? No. Amma, driven by a jealous rage fueled by Adora paying attention to someone other than her was the one who killed them. She presumably then set up John Keene, making it look like he was the murderer because let’s face it, Amma is a diabolical genius in addition to being a better than average roller skater.

But the big reveal that readers of the book had been waiting for, patiently keeping from their significant others who hadn’t read it yet, but were watching it with them, came at the end of an episode that up to that point, seemed to really tie a nice little bow on what had been a pretty fantastic eight-episode run. “Milk” opens with Camille rushing home, having realized that her mother was much more of a monster than she had originally thought. Amma looks like a zombie bride as she sits at the dinner table with Adora and Alan. Everything is totally cool in the Crellin house – big, old ham on the table, wine in the glasses, cake for dessert. Amma might be clinging to life, but eh, whatever. Come in and have a seat Camille; have some dinner before leaving for St. Louis in the morning.

Given the widespread belief that it was John Keene who killed the two girls and with him being taken into custody, Camille is expected to be headed out soon. At dinner, Camille offers to take Amma home with her. A change of pace might do wonders for her, get her away from Wind Gap. This shot across the bow of the steamship Adora is not taken kindly and Adora responds in kind, turning her attention to Amma, saying “her color is troublesome,” which given how Amma looks is a tad bit of an understatement. It’s at this point that Camille decides to embark on a suicide mission to save her stepsister and stop her mother, doubling over and faking stomach pains, a move that instantly shifts Adora’s attention in her direction.

“Let yourself be looked after,” she says to Camille, tucking her into bed. “This will be good for both of us. Don’t you think?”

I don’t think so and neither does Amma, who lurks outside the room. Alan? Well, he’s downstairs chilling with a beverage and his state of the art sound system, which is where he also is a day or two later when Richard comes by, asking if Camille is home. Alan says she’s out with friends. But Alan, Richard isn’t buying what you’re selling and soon the house is raided, the girls taken away to the hospital and Adora brought into custody after police found pliers that were used to pull the teeth of the Wind Gap girls. Later, when visiting Camille in the hospital, Richard adds that they also discovered Adora’s medicine cabinet, which included antifreeze, various prescriptions and rat killer. Amma had developed a tolerance to Adora’s concoctions over the years, which is something to keep in mind when you later learn that AMMA IS A PSYCHOPATH.

Then the rope-a-dope happens.

Amma leaves Wind Gap to live with Camille in St. Louis. Camille looks happy, Amma looks happy, I felt happy. Amma makes friends with the girl next door and they even go to dinner at the Curry’s house, giving Camille’s editor and pseudo-father figure Frank a chance to check out her latest Wind Gap dispatch. Again, everything is fine. Everything is wonderful. Everything is a little weird because Amma was a little frosty to her new BFF when she said she was thinking about being a journalist, but whatever. The food is delicious and wait, is that writing on May’s hand. I mean, that could mean anything, right? Nothing to be alarmed about. Remember, everything is totally cool now. Sharp Objects biggest twist is that it ends with a happy ending, right?

But May, Amma’s friend, has gone missing, which Camille learns when May’s mother comes looking for her. The two girls had their first fight, she tells Camille. Again, no big deal. Adora is in prison. There is no reason to be concerned because it’s not like, wait…is that a tooth in Amma’s dollhouse?

As Camille tries to make sense of this tooth, this very fresh and very recently pulled tooth that is hidden in her step sister’s dollhouse, Amma appears, very quickly realizes that Camille has an idea what’s going on and what’s been going on and responds “don’t tell mama,” which is cool because I responded by saying “what the eff” for about the 27th time while watching the show. Then, tucked into the credits, we catch a brief, choppy look at Amma ripping out one of dead Wind Gap girl’s teeth as her friends hold the girl down.

I guess we won’t wrap things up with a picnic on the beach this time around, huh?

The comparisons between Sharp Objects and Big Little Lies initially made a boatload of sense because it was HBO again taking a popular best-selling book and giving it the prestige TV treatment. Both series also featured the same director, Jean-Marc Vallee, as well as an A-List movie star. Last year it was Big Little Lies, this year it was Sharp Objects and next year it’ll be Big Little Lies again, as the show returns for a second season. But the deeper we got into Sharp Objects, the more we realized how lazy the comparisons between it and Big Little Lies were. The world of Big Little Lies felt bigger, more expansive than the world of Sharp Objects, which felt tight and restrictive, if not suffocating. And while Vallee did a fantastic job creating a sense of place in Big Little Lies, he took us by the hand and sat us right down in the middle of Wind Gap, Missouri. Sharp Objects was a master class in mood-setting, whether it was via unsteady camera work, rapid flashbacks or the show’s wildly innovative use of music. There wasn’t a score or even a soundtrack to the show. Instead, the only music we heard was music the characters heard; music coming from their iPods or over-indulgent home stereo systems or car stereos or the jukebox in what was most likely the one and only bar in Wind Gap. We weren’t merely observers here. We were participants.

There’s no doubt Sharp Objects was a tough hang, especially for summer Sunday nights. If anything, it felt more like a late fall or a winter show, where the mood outside was a better match for the mood inside. But it was never a laborious venture to slog through; certainly not like a show such as The Handmaid’s Tale where you definitely found yourself questioning why you were watching it at least a handful of times. Some moments of levity could have helped break things up, but it also would have proven disruptive, so I’m glad they weren’t there. This was an atmospheric show and part of that atmosphere was the immense amount of pain and internal struggling that Camille was constantly experiencing. We couldn’t just acknowledge her condition. We needed to feel her condition. With that happening, the twist at the end becomes all that more jarring. Not only do we learn that Amma was the killer, but we see those recently planted seeds of happiness being ripped from Camille when she realizes who Amma really is. Camille had spent so many years walling herself away from the world and here she had just started taking them down. Slowly, but down nonetheless. She opened herself up; made herself vulnerable. But in effect, she traded one violent and disturbed family member for another, leaving the audience to wonder among other things as those final credits rolled, where does Camille go from here.

But hey, HBO, I don’t want to find out! I want to be left to my own devices on this one. I was totally cool with how Big Little Lies ended, mainly because it was my understanding that it was a limited series. What’s done is done, right? Instead, what’s dead may never die and now it’s coming back. The limited series is easily one of the best innovations to be produced in this new era of television and when employed correctly, when the subject matter is too much for a movie and not enough for a whole series, it’s a perfect way to do a story justice, with Sharp Objects being the latest example of this. No one needs a second season of it. No one at all. Let’s leave well enough alone and move on with our lives.

Or let’s leave well enough alone and keep thinking about the lengths in which Amma went to cover up the murders because that alone will keep you going for a few more days. 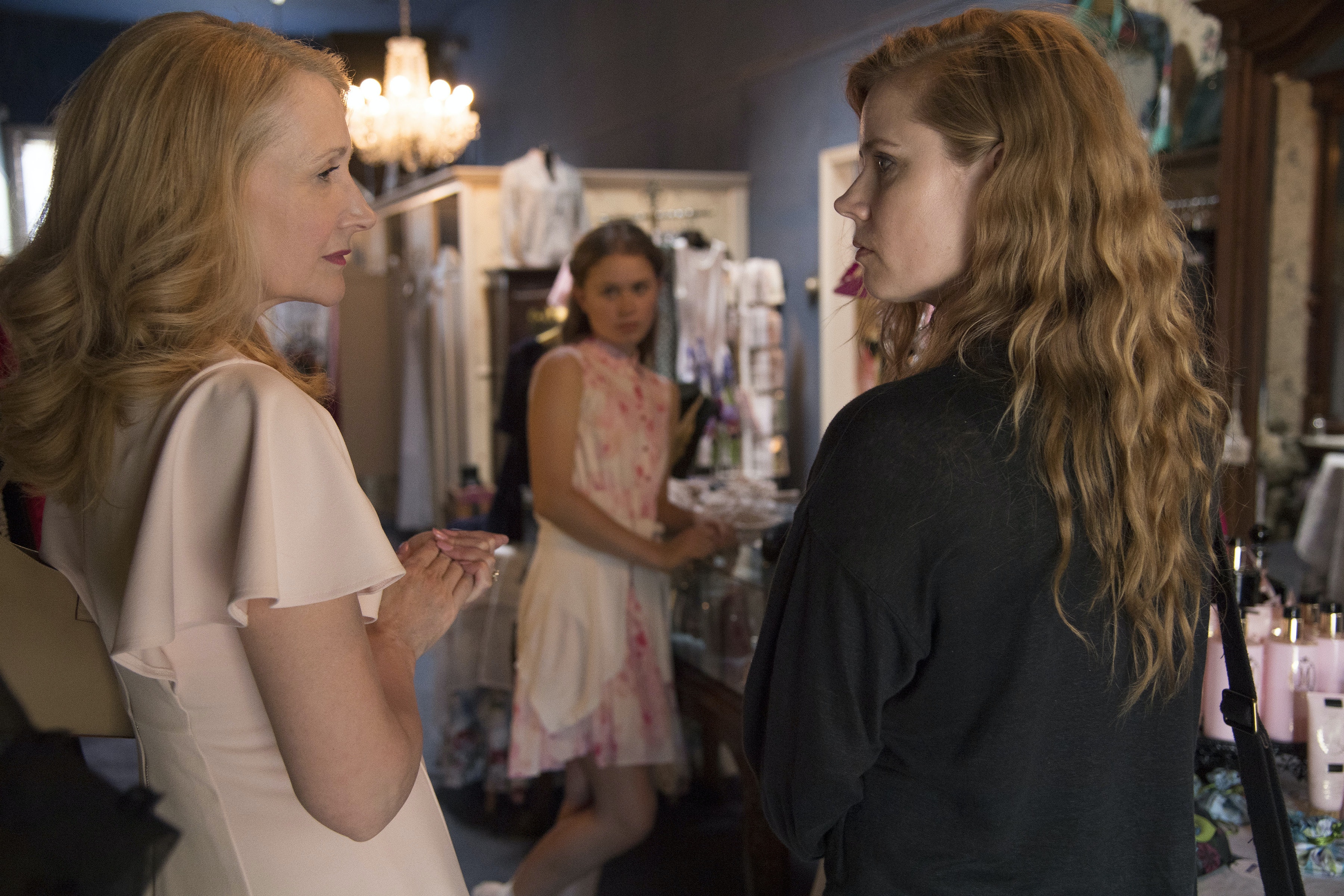 [Want to write for TV and City? Shoot us an email at submissions@tvandcity.com]