Whatever you think you know about Sabrina the Teenage Witch, pack it up, put it in a box, and get ready to go on a whole new adventure with Netflix’s Chilling Adventures of Sabrina. This new series has it all–horror, romance, demons, and above all, the infamous Salem the cat. As soon as you begin watching the series, you are taken into the dark, frightening corners of Sabrina’s life as she tries to make sense of her half mortal, half witch existence.

She has a decision to make as her sixteenth birthday approaches, but it means paying a large price that she isn’t quite certain she’s ready to pay. Played by Mad Men’s Kiernan Shipka, Sabrina’s casting was absolutely spot-on with Shipka, and she does a marvelous job embodying the innocent, romantic, confused teenage witch.

If you’re going into this series expecting it to be a lighthearted show, you would see it fit to change your mindset. Between the Satanic references, ceremonies, and supporting cast of demons, witches, and warlocks, there is quite a bit to be startled about.

The creepy twist this version of Sabrina’s story takes is a stark difference than any other version of the story that’s been told, and there is something to be said about the characters you’ll recognize, but feel like you’re meeting for the very first time.

The motley crew of characters includes Sabrina’s two aunts, Hilda (Lucy Davis) and Zelda (Miranda Otto), her boyfriend Harvey (Ross Lynch), and cousin Ambrose (Chance Perdomo). Along the way, you’ll meet her closest friends and some threatening side characters that add to the haunting allure of the story that unfolds.

If you’re a fan of CW’s Riverdale (crossover, please?), you’ll be quick to notice that this series also seeks to adapt the darker version of the comics, but unlike its sister show, CAOS has perfected the balance between drama, horror, and romance in a non-cheesy manner. You’ll find yourself invested in what is still a story about high school characters, but in a way, it feels more mature and sophisticated.

Are there aspects of the series that could use some work? Most definitely. Parts of the plot and the Satanic narrative aren’t explained and explored right away so you’re piecing together why certain things are so important to the Spellman family. But as the episodes progress, it becomes less of a concern, and you’re just invested in Sabrina’s journey.

My favorite part of CAOS? I didn’t know what time period it was in. In fact, I didn’t even think about it until someone takes out their smartphone some episodes later. There is a beauty in pulling something like that off because technology is the epicenter of our world and it’s also a homage to how traditional historical witch stories are perceived. However, at the same time, there are concepts and ideas infused within the dialogue of the series that voice the concerns of social and cultural events in our society today (the fight for feminism, etc). To pull all that off is an amazing feat and one of the things I truly admire about CAOS.

The standout villain characters many will immediately take a liking to are Michelle Gomez’s Madam Satan, and Tati Gabrielle’s Prudence. They are dark, cunning, and the type of villains that are the heart and soul of shows like this. They have a flair for the dramatic horror and were probably my favorite of the series apart from Shipka’s Sabrina. Their subtle nuances and quirks took the horror and terror to another level and without them, the show would be hard-pressed to convey the horror.

So while you may find the story gets a bit confusing, and some moments are glossed over quicker than they should be, you’ll enjoy the horrors CAOS has to offer this Halloween season. So grab your candy corn, get under your blankets, and get ready to binge Netflix’s spooky, riveting Chilling Adventures of Sabrina–you certainly won’t regret it.

I give Chilling Adventures of Sabrina a B+. 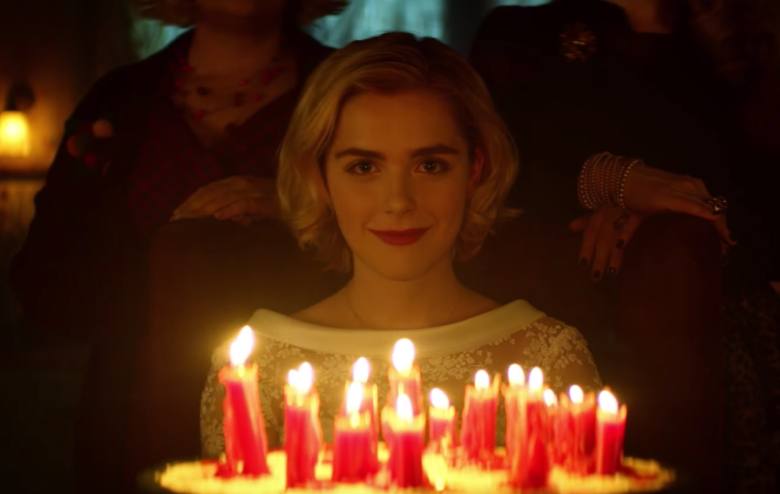