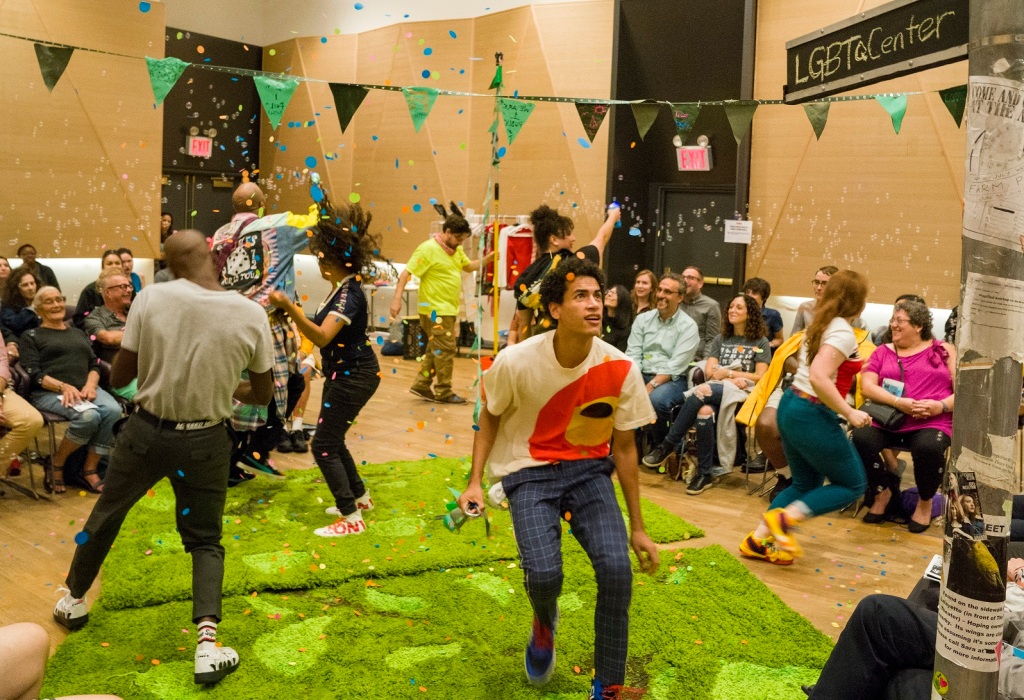 After a three-week tour to five boroughs bringing Shakespeare to audiences who have limited or no access to the arts, The Public Theater’s Mobile Unit began it’s run of A Midsummer Night’s Dream at The Public Theater on Lafayette Street this past week and will run through Saturday, November 17. Furthering the mission of making great theater accessible to all, tickets to the show are free and are available via TodayTix mobile lottery and in-person distribution downtown at The Public Theater, 425 Lafayette Street at Astor Place. On each public performance date, free tickets will be distributed in-person beginning 90 minutes prior to curtain, and via the TodayTix app.

Directed by Jenny Koons, a classic New York City block party becomes the setting for Shakespeare’s beloved play. One plot line follows he royal wedding of Theseus and Hippolyta, where a celebratory play is being rehearsed. But the real drama is unfolding in the concrete jungle of fairy King Oberon. There, four young New Yorkers discover that the course of true love runs anything but smooth, as supernatural sprites and the lovable Puck conspire to reveal what fools we mortals be, and draw us all into the collective dream of romance and merriment. The excellent cast makes the classic play and script come alive for 2018. Through their wonderful acting and intonation, the old English becomes understandable even to a theater goer who may not have previous experience with the Bard. This comedic play is an excellent choice for Public Theater as its plot is relatable to modern audiences and is well-played by young actors for a young audience.

The show is presented in a small theater with the audience sitting in the round, up close to the action. There is not really a stage – the drama unfolds on the floor in the middle of the spectators and the actors go to the back of the room when they are “off-stage.” Before the play begins and when it ends, the actors spend time talking and dancing with the audience members. Featuring scenic design by Kimie Nishikawa, costume design by Hahnji Jang and fight direction by Lisa Kopitsky, the show is minimalistic in nature but is quite enjoyable. The appropriately exaggerated depictions of the characters was humorous in just the right times. Special mention to Carolyn Kettig who played Hermia – her affect displayed the timeless nature of the story. She could have been a young modern woman caught in a love triangle, just as much as a character in a Shakespearean play.

In 2018, THE MOBILE UNIT celebrated the 61st anniversary of its inaugural mobile tour in 1957 which began with a production of Romeo and Juliet, directed by Joseph Papp with Bryarly Lee and Stephen Joyce in the titular roles. In August 2018, THE MOBILE UNIT announced the national expansion of it’s programming with a Midwest Mobile Unit National Tour of Lynn Nottage’s Pulitzer Prize-Winning play Sweat. The tour extends beyond performances with community engagement activities on the issues and conversations most alive in their communities.