One of my favorite 90s shows was Roswell, and this CW reboot is certainly a big twist on it. While I was a tad nervous about how this would go, I’m proud to report that this one exceeded my expectations by a lot. In other words, I loved it. So let’s discuss.

Good thing Liz’s reputation preceded her or she may have gotten herself into trouble at that checkpoint. By that we mean, we love every ounce of her sass and are already demanding more. It’s obvious that she can fend for herself and is blatantly independent. But Liz is also fiercely smart and is clearly a pretty good investigator. Maybe she should join Max on the police force.

The chemistry between Liz and Max is combustible. It really leaves us split over desiring more of their backstory and just seeing where things go between them in the now. It was especially great to see Max reveal the full truth to Liz pretty much immediately. If you ask us, it’s a great way to kick off a blossoming relationship between the two. Plus, that kiss was nothing short of electric.

But Kyle seems okay as well. And they discussed being exes so there is clearly some history there that just may not be resolved. Yes, we are shamelessly here for sexual tension and maybe a couple of love triangles. The hookup between Kyle and Liz was pretty intense while it lasted. Although, Kyle is involved with the military and obviously knows a bit about aliens. Our only question is about which side he is going to choose. Especially since he seems to have something happening with Michael.

Michael is the clear rebel here if waking up in a jail cell is any indication. If that wasn’t enough for you, his attempt to use his powers to escape along with a list of all the things he does to get in trouble should do it. In case anytime is still looking for a reason to call Michael the bad boy, there is the fact that he comes at Max for saving Liz’s life and then turns around and almost exposes them with his own powers.

Isobel is wildly combative and we aren’t really sure how we feel about her yet. Most of her scenes just involved her being pissed off at Max or the world. She certainly doesn’t want anything to do with being an alien. Isobel also seems to be more concerned with Michael and how he feels than she is with Max. Her own brother.

While Michael seems to be at odds with everyone, including himself, there seems to be something more with he and Alex as well. Or it could just be that Michael is a major jerk because that seems to be how he is shaping up. We’re sure he will end up lovable and an easy favorite, it for now we are giving him some serious side eye.

Alex is an unknown for us so far. There is something off about him and it is more than just the fact that he works for the military. More than the fact that his father seems to be the one leading the charge against aliens. We have to wonder how much Alex actually knows about the situation and which side he is going to place himself on.

The town hating on the Ortecho family had us pretty angry. For a multitude of reasons. Yes, Rosa was driving under the influence of drugs when she got in her accident. But there is an extremely slim chance that she was completely to blame. Even if she was, the family isn’t to blame and have all their own grief to deal with.

Maria has already proven herself to be a badass that no one should mess with. And that was just in her first appearance. She’s also made it pretty clear that she won’t take any nonsense. So yes, sign us up for more of Maria and the beautiful friendship between she and Liz. Plus, the woman has some mad dance skills and is quick to stick up for a friend.

Project Shepherd has us more than a little curious. They clearly already know about aliens and exactly what to look for. The government also seems to have a one up by keeping Kyle on the lookout for the handprint. Meanwhile, the resident aliens of Roswell don’t seem to have any idea that the government is on to them. So they’re going to have to catch up quickly.

Pilots are rarely ever perfect, and reboots usually add in an extra obstacle. But we have to admit that this one comes pretty close. From breezing through the backstory so newcomers can understand and those who love the original can appreciate to offering up something new to everyone. This is a pilot we can get behind and it’s certainly a new show that has left us eager for more.

I give Roswell, New Mexico‘s pilot a B. 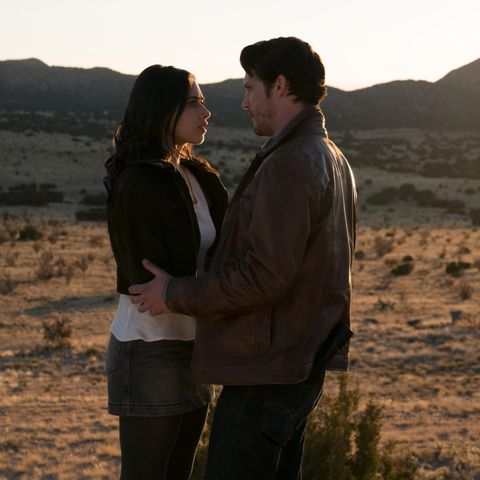