After Life premieres March 8 on Netflix.

What is it to cope with love and loss and how does our way differ from those around us?

This question is at the root of Ricky Gervais’ newest Netflix series, After Life, as Tony (Gervais) is dealing with the death of his wife from breast cancer earlier in the year. He’s miserable to the point of suicide however he is unable to go through with it each time because of his worry for his dog’s well-being. This oscillation between wanting to live, albeit unsure why, and wanting to die is explored in each of the series’ six episodes as the people around him are forced to aid Tony in their own way while also enduring their own problems with life.

The character of Tony is not unlike previous Gervais characters – selfish, sarcastic and constantly annoyed at strange everyday quirks of people around him but if you’ve enjoyed Gervais’ previous work, then you should settle right in with Tony’s worldview, however, where Gervais excels with this particular role is his ability to push it further into dramatic authenticity by exploring what it is that drives people to that specific dark place and how or why would anyone in that much pain want to dig themselves out. Depression to this extent is a bitter pill to intake onscreen for much of this series but After Life mixes in perfect subtle moments of humor and wit enough where balance between the two extremes is achieved.

At the beginning of the series, I was nervous because in many ways After Life began to resemble many of Gervais’ previous successful comedies and the comfort that it brought was also accompanied by a sense of apprehension that this could be or say anything different than what came before, however, as the series progresses there is an incredible dynamic change with the character of Tony as he is forced to interact with others in his similar situation or those that have survived through it and as he processes their functionality in the world he slowly begins to make changes in his life that echo what he’s encountered. It’s a beautiful and raw transformation that also provides ample opportunity to still not be okay with how the world has dealt his situation to him which only makes his character feel more real and human.

There is a line that is said by one of Tony’s friends in the last episode of the series that perfectly sums up Tony’s journey – “Happiness is amazing. It’s so amazing it doesn’t matter if it’s yours or not.”

Tony doesn’t want to be happy. He wants to not have to feel anything anymore but it’s through the slow and meandering process of getting up each day and interacting with others that are experiencing similar pain but in their own personal way that he begins understand the precious value of finding happiness. After Life does an excellent job of showing one man’s path towards this discovery. It doesn’t shy away from awkward and difficult moments that take on a very real feeling through the eyes of someone who is reluctant and resistant towards having to change. The entire project feels so personal and authentic that it’s impossible not to watch the series and not feel something. I understand the pedestal The Office is placed upon and while I personally think Extras is some of Gervais’ funniest work, After Life would have to be one of his best achievements to date and I recommend giving it a true chance.

I give After Life an A. 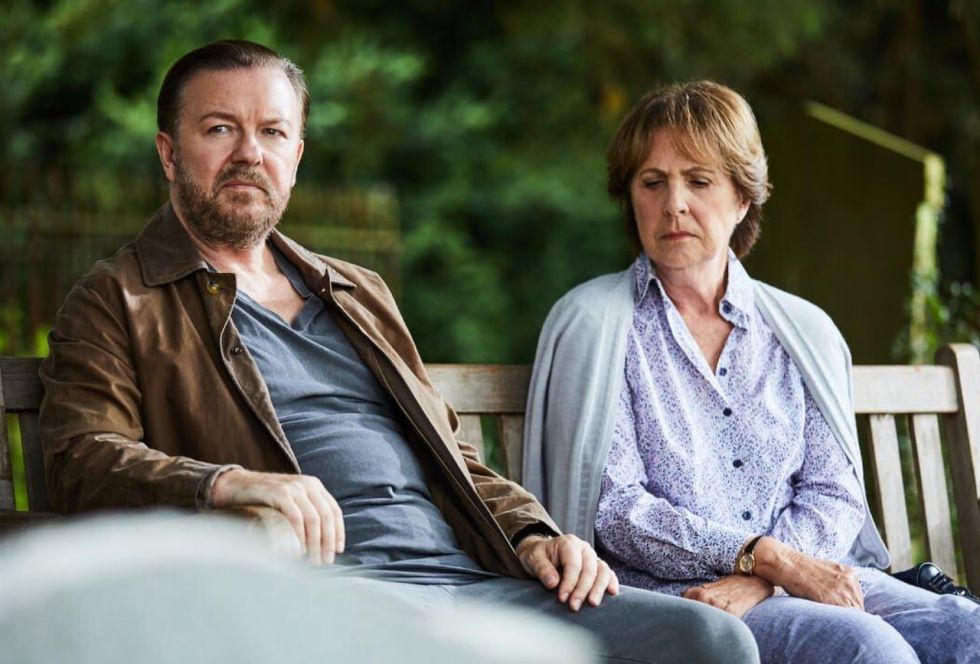