Tolkien hits theaters on May 10.

As someone who knew almost nothing about J.R.R. Tolkien’s life before watching this film, I found this origin story, which traces Tolkien’s life from boyhood until he begins writing the work that will become The Hobbit, very interesting. The film works with two parallel timelines – one beginning with Tolkien as a young boy and one when he is a soldier in World War I. The two catch up to each other towards the end to give the audience a glimpse of what’s to come. The WWI storyline was a bit drawn out, but the story of Tolkien’s early years was fascinating.

Learning of all the influences on this famous author’s life, from his family to his schooling to his strong relationship with a group of friends, and of course, his love, really helps frame his epic works which the world has come to know and love – The Lord of the Rings Trilogy. Nicholas Hoult, who plays Tolkien, is a pleasure to watch and the focus of the film – the “fellowship” he develops with three classmates (all excellent actors) – is a delight. An orphan who is placed in a foster home with his brother, he is nevertheless sent to an expensive prep school. While he is always a bit different than his wealthy friends, his intellect and creativity earn him a spot in an exciting group of young men who share his interests and dreams.

The film also provides context for Tolkien’s work as an author. His mother introduced him to literature early on and he shares her passion for the written word. He has a vivid imagination and begins to draw imaginary creations from a young age. In school, he creates his own very developed languages (which later leads to the study of philology). After, at Oxford, he begins to develop his craft.

Also at the center of the plotline is Tolkien’s developing relationship with Edith (Lily Collins), who is also living in the foster home. Tolkien is forced to make some tough choices about his future plans with her so that he can pursue a higher education at Oxford and he struggles with the consequences. A sweet love story that runs throughout the movie, played well by Collins and Hoult, adds a component to the film that even non-Tolkien fanatics can enjoy.

The film allows us to see Tolkien’s life as a journey or quest – themes that appear in his trilogies. Understanding his humble beginnings and the obstacles he faced add to the appreciation fans can have for his incredible work.

I give Tolkien an A-. 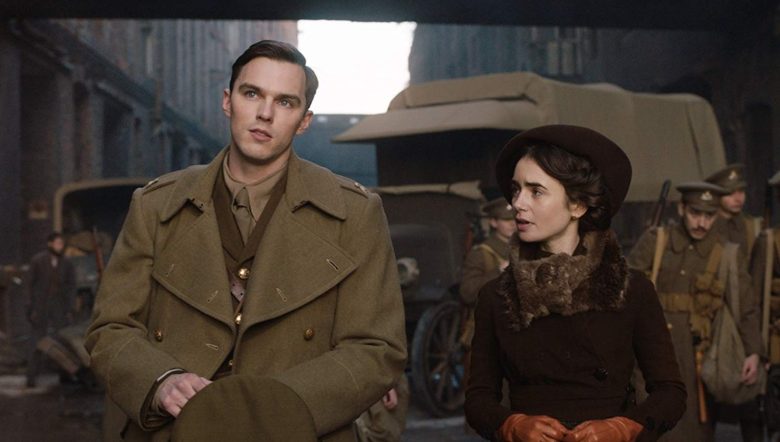