New episodes of The Mandalorian are released Fridays on Disney+.

If I’m being honest, I wanted to wait to fully compose my review of Disney+’s marque original programming for several reasons; more than once episode needed to be seen to help provide a more complete picture, more time was needed to watch the two episodes out more than once (3x if you’re keeping score at home), and I needed to give the unexplainable nerd-hype that had dwelled within me since last Tuesday a chance to die down in order to collect my thoughts and place them in this article. As of now, this third necessity is at bay long enough for me to proceed…for now.

For the uninitiated, The Mandalorian follows an unnamed bounty hunter who is from Mandalor, the famed planet that is responsible for producing some of the best warrior-assassins-hunters in the known Star Wars galaxy. But unlike the previous iterations, we have been exposed to with this race, this particular character is one who is not the all-powerful bounty hunter that we’ve witnessed in the past. This is a huge risk by the showrunner, John Favreau, but one that I believe pays off beautifully as it helps humanize the main character who never removes his helmet, thus severely limits his emotional range. The emotional investment in what appeared to be a one-sided character was a concern for me after the first episode, however, I found that it wasn’t until the second episode where the viewer was able to fully invest into The Mandalorian through several major scenes where it was clearly obvious the emotional struggles the main character was undergoing. This occurred in two largely pivotal scenes in the second episode – the budding relationship between himself and baby Yoda (need a better name!) and the acceptance of death at the hands of the Reek/mudhorn.

BABY YODA!!! Can we just stop for a second and enjoy the essence that is a baby (50yrs old) from Yoda’s unknown species? I thought it was near impossible for Star Wars to generate another creature that I would fall in love with and somehow they manage to create the very thing that brought my tough facade crumbling down. Mark my words, if anything happens to him, I will riot.

The first moment is something that plays wells into the character growth of our titled character as the writers have chosen to correctly have their relationship grow over the time they spend together helping change The Mandalorian’s moral code over the season. This is something that is never stated in the episodes but is witnessed through clever subtext that I long for more of. The second was a more powerful moment within the episode as it required an incredible amount of acting from lead Pedro Pascal. His body language was the only tool used to emote the acceptance of his fate at the hands of the mudhorn and was done so in a way that was beautiful and surprising. The heavy breathing, the dropped shoulders, and slowly downturned head were all visual cues of an internal struggle that we didn’t have to hear to understand and was handled expertly which generates excitement for the remaining episodes to come.

The small knock towards The Mandalorian is that at times its production budget, while nowhere near small, resembles that of a TV budget. This is something that is expected to a degree, however, given the immense pedigree of its predecessors can be a difficult task to live up to. That being said, I felt that the show made wonderful use of blending its practical and digital effects to help create a world that feels familiar and still offers so much that we don’t or will not understand. That is where the wonder of Star Wars and its vast universe lies for me and is something that The Mandalorian knows to lean into well in order to maximize its appeal.

The Mandalorian is a show that manages to base itself in a universe that has been created over several decades and push its limits even further to interest both the casual and die-hard fan to continue watching as it centers around a character that despite certain outward limitations to emote offers up non-stop entertainment while telling a compelling story that needs to be experienced by all.

I give The Mandalorian an A+. 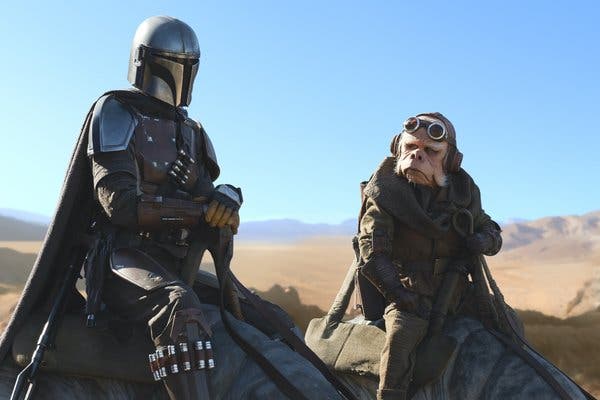