A Christmas Carol is playing at the Lyceum Theater until January 5.

Consider this Jew impressed. I loved A Christmas Carol on Broadway.

While I have not read the original source material, Charles Dickens’ A Christmas Carol is one of the most famous stories in history. It’s been adapted countless times – even The Muppets and Bill Murray have put their spin on it. The tale is a simple one: Ebenezer Scrooge is a stingy grump (“Bah, humbug!”) who cannot appreciate his loved ones nor the charitable spirit of Christmas. On Christmas Eve, Scrooge is visited by three ghosts (past, present, and future) who show him the error of his ways. Suddenly he’s a nice guy helping the less fortunate, hooray! There’s more detail of course, but that’s the gist of the plot.

This Broadway production is pretty faithful to the old text. There are some relationship additions, like Scrooge’s abusive father. Yet overall, this is a bare-bones show. The set is also simplistic, which I enjoyed. It consists of just lanterns and doorframes, yet somehow the movement conveys all the audience needs.

The cast is superb. Campbell Scott is an impressive Scrooge. Andrea Martin and LaChanze stand out as the Ghosts of Christmas Past and Present, respectively. Brandon Gill makes Fred charming. But the MVP is Sebastian Ortiz, a little boy with cerebral palsy, as Tiny Tim. OMG, he is so so cute.

As for what could have been better, a few things come to mind. There was an unnecessary intermission an hour in. The story doesn’t really suit itself to a traditional two-act structure and it shows with an awkward curtain fall, followed by an hour that did not need a break. Most noticeably, sprinkled throughout the play are comedic moments that have no place being there. The rest of this version of Carol is so quintessentially Dickens that inserting random 2019-style cracks is super off-putting. It was hard to ignore this.

The last 20 minutes of this production is the most fun I’ve had on Broadway in a while. After Scrooge sees the light and gives into the merry-ness of Christmas, it is the audience’s task to help him and his nephew assemble a feast. This was a sudden tonal shift from the gloom of the script, but it worked surprisingly well. Potatoes are masterfully rolled down from the balcony! Vegetables and other goodies are parachuted in! Cakes and sweets are thrown from the orchestra seats! It’s quite magical and made a lasting impression. I will not be forgetting A Christmas Carol. 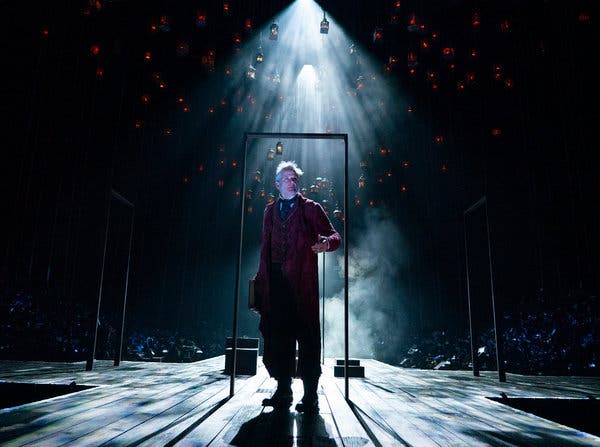