When I was first tasked with reviewing Spinning Out, I wasn’t sure what I was about to get into. But from the moment I started the series all the way until the very final moments of the first season, I found myself hooked and drawn into everything the series was about. Now, I don’t want to give too much away, but I have nothing but praise for Spinning Out.

At its heart, the series is about mental health, the stigma around it, and how it impacts one’s life in the most ordinary, as well as extraordinary ways. At the center of the story is a figure skater named Kat, who hopes to one day partake in the Olympics. She’s ambitious, she’s ridiculously talented, but life isn’t as exciting as it would appear. In fact, her lifelong struggle with bipolar disorder mixed in with her mother’s personal struggle with the disorder has made things rather difficult through the course of her career.

One unfortunate accident coupled with her mental illness spells out the story of Spinning Out and takes you through what Kat experiences on a daily basis. The rawness and sheer emotion of the series is something I’m having difficulty placing into words. As someone who deals with the ups and downs of mental health struggles, I found myself relating to Kat in so many ways, despite not sharing the same disorder. This is the beauty of Spinning Out–it gives a voice to mental health struggles and reminds everyone that they are not alone. Whether you’re trying to be an Olympic figure skater or just trying to live your regular, ordinary life, mental health affects us all.

Spinning Out shows Kat’s journey via her career and mental health, and shows what it’s like to grow up with her disorder, and be subjected to the intense ups and downs of it–through her and her mother. It’s quite remarkable how simple yet profound the series is, and once you watch it, you’ll understand exactly what I mean.

Kudos to the cast for bringing together the series so perfectly! Namely, January Jones who plays Carol Baker (Kat’s mother) and Kaya Scodelario who plays Kat Baker. Both of them are absolutely outstanding in their roles, and bring a realness to the mental disorder they are trying to portray. There’s something to be said about how beautifully they articulated such a difficult task, and I honestly felt it was award-worthy at times.

So, as you ring in the new year, let Spinning Out be one of the first shows you check out so it can serve as a reminder of the struggles many face but are often too scared to share with the world. We’re not alone–no matter what we do, how wealthy or poor we are, or where we come from. Mental health issues affect everyone, and Spinning Out is the type of show that will remind you of that in the most beautiful of ways. Please don’t miss it!

I give Spinning Out an A-. 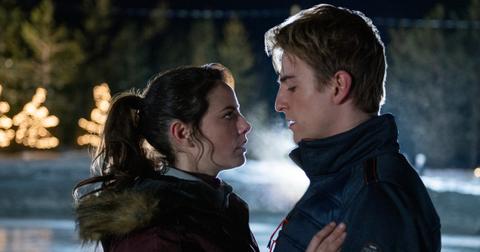