There are two movies to be found here. The first half is the worst of Spike Lee’s tendencies as a filmmaker. The latter half are some of his best.

Four Vietnam vets make their way back to the country they did war in, four black men fighting a pointless proxy war. I think it’s been long enough that media can now admit what a pointless waste of time the whole venture was, the amount of people who died over a dick measuring contest. Da 5 Bloods fights with itself because the original script is clearly a jingoistic hoo-rah clunker that the likes of Oliver Stone would make (it’s fitting that he was the first choice to direct before Spike Lee took over). Something like <i>Platoon</i>, but funny, is clearly in mind with the film’s first half, where it seems Lee made the least amount of revisions. Four vets make their way to Vietnam, and dance the night away, four old men playing at being young, as they make preparations to find a secret cache of gold they lost in a fateful battle and now return to claim for their own. Of course, complications ensue. One of their sons has snuck over with them, and there are many interested parties in this massive hidden fortune.

If not for the film’s second half, which Lee described in interviews as a modern take on The Treasure of the Sierra Madre, this film could at least be described as “essential viewing, but deeply flawed,” like a lot of Lee’s work. The first half has some really fantastic moments that Lee is able to elevate, like a really deranged sequence where the vets attend an Apocalypse Now themed rave, fully intending to highlight how ironic it is that this film has become an empty pop culture husk instead of the film it intended to be. It even replicates that film’s famous “Flight of the Valkyries” sequence, but instead of it being a one-sided massacre, our vets screw around in the boat they’re traveling in. It’s obvious Lee is trying to take this godawful first draft by different writers and mine whatever satirical elements he can out of it, and when it works, it works really well.

But the film is bogged down by a lot of subplots, and a lot of bloat, and it could’ve done well to lose at least a good hour of its runtime. Some of these are arguably necessary, like Clarke Peters’ dalliance with an old lover serving as the means for the vets to recover the gold. There are others, like the clash between Delroy Lindo and his son, played by Jonathan Majors, which adds in an abrupt tangent about how his mother died in childbirth and that’s why the two hate each other. In a movie already bursting with a million things to say, it’s these tangents that take some of the steam out of the film’s first half and even moments during the far superior second half.

But then there is the second half of this movie, where Lee abruptly switches gears completely, and proves the man has not lost his touch with age, and delivers in a series of escalating sequences I won’t describe here that take the traditional elements of a Vietnam War-era movie (the military jargon, a soldier mourning his mortally wounded companion, digressions on the point of it all, constant references of going back to the world, everything that Oliver Stone tried and failed to do as a filmmaker) and turns it so utterly inside out that it’s impossible to ever watch another war film from this era. Lee does not seem to like Vietnam War movies very much, and can you blame him? If Tropic Thunder was an inconsistent attempt to mine humor out of how utterly melodramatic these violent soap operas were (and that’s not even getting into its deeply uncomfortable reliance on blackface as a comedic prop), then Da 5 Bloods dares the audience to cheer along, while clearly being disgusted by the very concept of war films. People die violently, and the worst part of it is that both our heroes and their antagonists are all being manipulated by the same force as before. Lee is very much interested in the cyclical nature of history, even as he splices in historical events from centuries of history. In the middle of a firefight or an argument, you’ll learn about Crispus Attucks, the black man who helped properly start the American Revolution, practically vacuumed out of the history books for slave owners like Washington and Jefferson. The Martin Luther King speech you see here is not the sanitized portrayal that’s a fan favorite of many conservative elements, but rather the cunning and calculating strategist assassinated for opposing the Vietnam War and seeking an intersectional working-class revolution.

The first half has bits and pieces of this digression, too, and that’s where the film is able to save itself. An element that made me nervous as the film starts is that its main character, Delroy Lindo as Paul, is a gleeful out-and-proud Trump supporter and infuriates the rest of his old unit by blathering out rightwing talking points at random. Lindo seems to struggle to find the character at first (as they all do, Lee made a point in interviews to note this was originally a film with an entirely white cast and the suggestion that the Trump supporter was originally far more of a sympathetic character), but the second half is where Lindo and the rest of the cast click into place. There are simply too many films about rehabilitating fascists or showing that the marginalized group in question should just make friends with the people trying to kill them (Green Book would like a word), but Lee very astutely notes that the situation is not the same when it’s a black man supporting a demagogue. A black man does not arrive at that support the same way a white man does. That’s the sort of nuance the New York Times should take with their “smalltown America” interviews, and Lee truly wants to investigate how this can be possible. Does Lee answer that question? It’s not my place to say as a white reviewer, but it’s still probably the only time in which I have seen any filmmaker tackle that ideology and not come off as endorsing it.

Lindo’s Paul is fascinating because Lee catches on to something about him, and by extension, anyone who may veer in that direction politically, that I’m not sure anyone else has noticed before: Paul does not support Trump because he likes the guy, Paul supports Trump in a devil’s bargain, having fully bought into the notion that he can be in control of his surroundings in this way. He makes the intentionally aggravating comments and insults his progressively leaning son because he values personal power over any kind of compassion and empathy, and yet it is his trauma in a war that didn’t even care about him that leads him there. That’s a difficult tightrope to walk, and I won’t say exactly how it turns out, but Lee is able to find the nuance in it that a film like American History X didn’t even bother trying for. That film, despite intending to portray white supremacists as they are, ended up accidentally swelling their ranks and serving as recruitment material. I doubt the same could be said of this film after Paul has been psychologically eviscerated over the course of his encounter with his own abyss, so to speak.

Again, that’s nuance I don’t feel is my place to address any more than that as a white reviewer, but it’s still a tremendous performance and Delroy Lindo gives a truly unbelievable performance after a career of nothing but. That’s not to say the rest of the cast doesn’t either. You’ve got The Wire mainstays Isaiah Whitlock, Jr. and Clarke Peters (and the former does let out his trademark catchphrase during an otherwise tense scene), along with Norm Lewis and Jonathan Majors. The latter was the best part of The Last Black Man in San Francisco, and he does a lot with what little he’s given. Chadwick Boseman, portrayed as the lead in trailers, is given less than five minutes of screentime as the squad’s dead leader (not a spoiler), but he’s able to leverage the absolute magnetic persona of his to be the mythic figure that would get these people to travel halfway around the world for such a scheme.

The other bit I’ve seen a lot of people addressing is the choice to go in the opposite direction of The Irishman and intentionally show the squad as the same age in both the past and present of this nonlinear timeline, shifting aspect ratios and all. Some people have really disliked this, but I almost wish the opposite was true. It effectively conveys just how completely shattered their minds have become in these largely romanticized memories, and the way in which Lee is able to shift from memory to reality through a single long take that shifts from the audience’s POV to Lindo’s POV is nothing short of brilliant. The little experimental and surreal additions like that, or the interjections of a 1960s era radio show as a sort of Greek chorus, makes bits and pieces of the first half and the majority of the second closer to a visual tone poem. The second half is essentially what The Thin Red Line should have aimed for (and I know what kind of statement that sounds like, but Terrence Malick has never been my bag).

But there is that first half, and it really struggles at times. Part of me isn’t sure if Lee is intentionally trying to make it as bog-standard of a piece then just to lull you into a state of false security, even as its genre elements are constantly subverted at every opportunity. If so, that’s a hell of a brave move for a filmmaker to pull. But Lee is at the top of his game, he’s got two Oscars to his name and he’s one of the most beloved filmmakers of his generation. He can afford to rub a MAGA hat in the dirt (literally) and end the film with a very direct call to action (the film’s ending is the first time I’ve seen something of the sort, which I don’t want to spoil, portrayed in media, but needless to say, the eventual fate of this massive fortune does not go the way it normally does). This is probably the most explicitly anti-capitalist film Lee has ever made, at the very least, and one that sure as hell places capitalism at the altar of white supremacy where it has been the whole time.

It’s very much a Spike Lee joint at its core, best and worst of his tendencies all wrapped up into one. If you love his work, then you’ll really love this. If you dislike him for whatever reason, you’re probably never going to enjoy this. But I’m glad to see the discourse going further in this direction, and it’s not getting there fast enough.

I give Da 5 Bloods a C+ for its first half, and an A- for its second half. 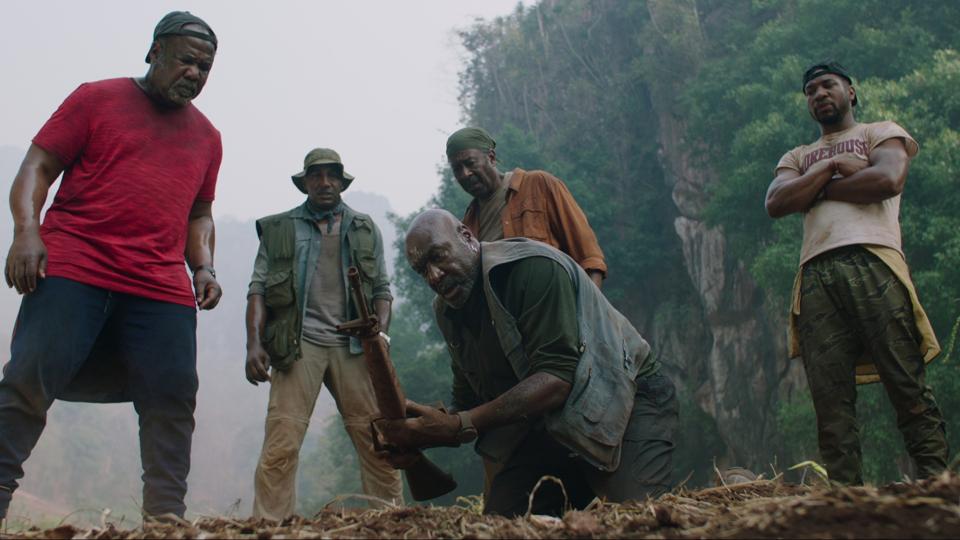