Tesla is now available to rent on digital platforms.

Tesla is a biopic that goes completely off the rails to demented places. The film is about as manic and unhinged as a movie about a famous figure gets, borderline incoherent in some places, but damn if it doesn’t oftentimes show a glimmer of true brilliance in all of its distractions. In what other film would you cut abruptly from Tesla’s failing business empire and his machinations getting the better of him to singing karaoke without any kind of context whatsoever? Why is Thomas Edison abruptly diddling around on an iPhone after sabotaging Tesla’s latest grasp for greatness? Why is every historical figure in this film compared to one another during a lecture by the amount of photos each of them has on Google? The intention is to show how much Tesla was ultimately able to inspire in a future the film claims he invents (he had a part in it, but all of it?), but it often comes off like a visual grab bag of assorted oddities to separate itself from the chaff. We all know how godawful a truly uninspired biopic can be, and Tesla very badly doesn’t want to be seen in the way that a Bohemian Rhapsody or Green Book might be derided. The film does ten things wrong for every one thing it does right, but the things it does right would have been so much stronger in a film that had better connective tissue drawing it all together.

There’s already a film released before this that covers the exact same subject material: Alfonso Gomez-Rejon’s The Current War, which also documents the historic feud between Thomas Edison, the fraud who stole every invention ever attributed to him, and Nikola Tesla, the brilliant and gifted mind who was ruined by him. That movie, in spite of its frenetic pace and visual trickery, is a proven sedative, and while this one is a lot messier and a lot less functional, it still vastly succeeds over this one by virtue of never having a dull moment in it, even when you’re not sure what the hell is going on. Much more interesting is that this is a script first written in 1985 according to a couple Google searches, and a film shot in modern styles while having a shelf life of nearly half a century is going to create quite an odd duck of a picture as a result. The script clearly got some revisions considering its inclusion of smartphones and laptops and the internet in its intentionally historic inaccuracy (hell of a way to get around that old critical chestnut, I’ll give them that), but you feel a lot of inspiration taken from 1980s historical epics. From Gandhi to Reds to The Last Emperor, this thing is written in the exact same structure, with the exact same booming authority from every character that dates all of those films. At the same time, it features the aforementioned karaoke and Ken Burns style lectures and a scene that culminates in an ice-cream fight. The structure of your typical historical epic is upended every few minutes by the film with the shortest attention span I’ve ever seen for some wacky hijinks, and I kinda wish more movies went for broke like this.

In spite of it all (and I saved the really bonkers content for anyone who dares to watch this), you have Ethan Hawke delivering the most ridiculous lines of dialogue possible with as much self-seriousness as possible, and in spite of it all, the gambit actually works. Hawke is largely recycling his performance from First Reformed with a really inconsistent attempt at a Croatian accent, but it honest to god works, maybe because of how strange and off-kilter it is. His Tesla is eccentric like any great genius in these types of films are, but instead of being celebrated, he’s largely ignored and pushed out of his own story, completely unable to fixate on anything other than his work. He attributes his success to a dead older brother who he describes as “the bright one in the family,” he is literally incapable of holding a conversation or fending for himself and the rest of the film’s characters take advantage of him constantly for it. That’s a fascinating place for a film to go, to accurately reflect a person who was never celebrated until after his death, to truly highlight in the film’s strongest scenes exactly how awful it was to be a genuine talent with not the slightest bit of skill at networking. This could’ve easily turned Hawke’s performance into a mockery, but he really does go for it. Sometimes the movie is able to sit still long enough for the performance to not be overshadowed by the bells and whistles.

What’s really fascinating though, and the one thing this film does that I absolutely adore in spite of how much of it annoyed me at times, is the choice to film Hawke against a combination of old-school studio backdrops, assisted with some digital final touches. It puts him against paintings and old photographs blown up to high quality detail, turning him into an abstraction on the backdrop. Those scenes, when the framing isn’t too wonky, are astonishing to look at despite clearly being utilized as a cost-saving measure. They’re so damned good that they even serve as a model for filming during our current pandemic despite filming finishing before the lockdown started. There’s a really wonderful sequence that evokes Frankenstein where he observes lightning crashing in one of his laboratories that treats the lightning strike by itself like Frankenstein bringing his monster to life. It’s pure Cannon Films cheesiness, but Hawke is so sincere in his adoration that for those fleeting few minutes, you are completely sold on it.

I think, ultimately, in spite of how much Hawke absolutely kills it and some of the inventive filming choices, what ultimately hogties this is the ways in which it contradicts itself in the message it’s trying to convey. The film both openly has characters, including Tesla himself, make anti-capitalist statements and then spend entire sections of its narrative fawning over robber barons like J.P. Morgan. His daughter Anne is posited only as the film’s improvised Greek chorus and a romantic interest for Tesla despite the two barely knowing each other IRL and Tesla dying unmarried and a virgin. Why does the film both have these really inventive subversions of tropes and then fall headlong into others? The incessant voiceover that takes up a vast majority of the film feels like an attempt to evoke Terrence Malick and yet just feels excessive and unnecessary. The film even devolves into whole segments of monologued lectures about Tesla, the time he was in, what he was inventing, all of his patents, as if we’re in middle school history class, then it cuts to a scene of him having a panic attack upon seeing a pearl necklace, falling on his ass while in roller skates. You see how this can be a bit aggravating right? There’s so much film, and the script clearly hasn’t had enough revisions since its first draft, and yet there are the things that it does that are genuinely brilliant. Ironically, this seems to bring to mind the contradiction of the real-life Tesla: a genius, but apparently not the easiest person to be around.

If this all sounds like a lot, I haven’t actually spoiled the film more than the vaguest overviews of the fever dream that is its plot. The other film this brings to mind is Capone, a similar fever dream of a biopic directed by disgraced Fantastic Four reboot director Josh Trank. That film goes in the complete opposite direction as this, depicting Al Capone in the last year of his life as he goes steadily senile and loses his sense of reality entirely, skewering the entire gangster genre in one giant subtextual explosion of impotent rage. This largely is a hagiography but one that accidentally highlights how incredibly difficult it is to make a portrayal of a well known historical figure without falling all over yourself. There’s a lot of scenes where characters deride Tesla for things that are commonplace now (“Two devices able to communicate with each other over great distances? Poppycock! It shan’t ever be done!”) which feel similar to those oft-derided scenes in Titanic where Kate Winslet is mocked for liking Pablo Picasso and Sigmund Freud and whoever else. A modern man would, of course, be derided by those simpletons too foolish to understand Real Genius. For of course, you, the audience member, are the True Genius. There’s too much of that here. But this film is also impossible to describe in coherent terms. It throws everything at the wall, not everything sticks, but damned if I didn’t enjoy the mess in some strange, perverse way. 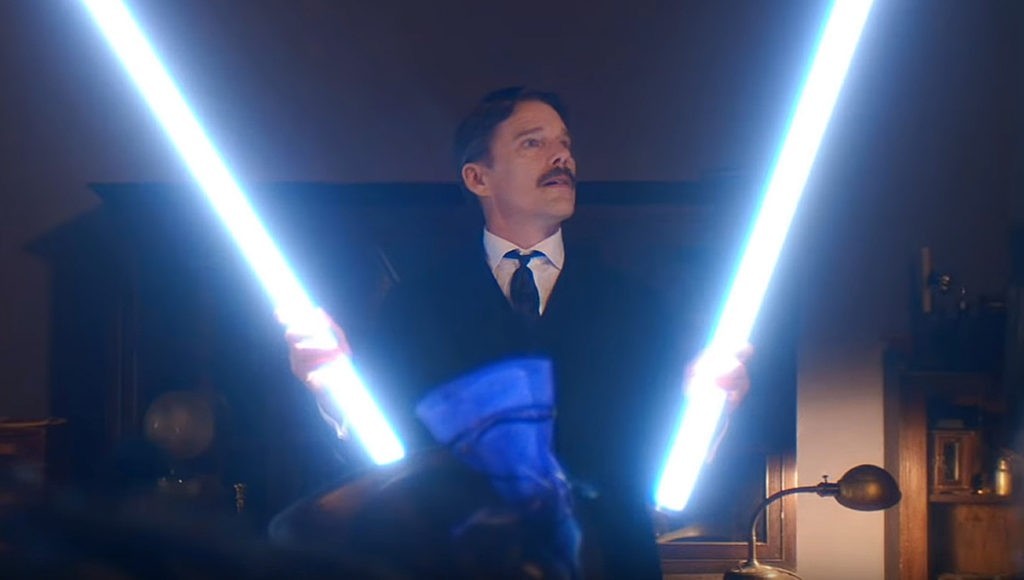