What’s really going to work against Bad Hair, not in terms of its quality but in terms of its critical reception, is that it’s going to be unfavorably compared to Get Out. I think any horror film coming out since 2017 has gone through a version of this, and because irony is dead, it’ll be horror films by Black filmmakers who get judged even more harshly as a result while the Ari Asters are almost uncritically celebrated. That is not to say that Ari Aster is a bad filmmaker, I’m writing this as a person who adored both Hereditary and Midsommar. Even so, we are seeing the slow shifts of progress that aren’t enough and should’ve been more so all along, and that’s the climate with which we find Justin Simien’s second directorial effort.

Simien is probably best known for the film Dear White People and its subsequent Netflix adaptation, in which the Black students of a fictional Ivy League school collide hard with a mostly white administration that seems eager to adopt a “post-racial” mindset even as it becomes increasingly obvious that’s not possible. In the wake of the last several years, it feels less like a prediction than an exhausted “I told you so” given how much of the events of both the film and the show have replicated themselves in our political climate. The film is best known now for breaking the breakout role for Tessa Thompson and the show is best known for inducing hysterics in many a white person in denial through it generally not holding back on the various hypocrisies that makes up race relations in this country. Simien is very much a director used to getting a rise out of the white people who “don’t want to see race” or “don’t want things to be political,” and Bad Hair follows this tradition to its logical conclusion, as it falters in some ways but mostly makes up for it with its gleefully nihilistic tone.

Elle Lorraine plays Anna, working at a television channel called Culture, promoting music videos for Black artists but owned by white executives. Her now-former boss (Judith Scott) has become fed up with Culture’s general hypocrisy has up and gone, only for her to be replaced by Vanessa Williams as Zora, who insists that all of her employees are not allowed to have their own natural hair. Zora obsessively wants Anna to get a weave in order to remain her employee (out of her own paycheck, no less!), and as is the case with such endeavors, the shop she recommends she go to has more of a supernatural bent and the new addition begins making some mayhem of its own.

Of course, her new hair draws a lot more attention and her ambitions to eventually become a host on Culture might actually become a reality, all thanks to the way she’s now perceived, even as the weave hurts her scalp and seems to do strange things when she’s overly stressed. It’s not a spoiler to say that Bad Hair is a very unconventional vampire story in a lot of ways, twisting and turning until it becomes a commentary on Blackness only allowing to exist in proximity to whiteness. It means way more than that, and I feel like delicacy is needed given the topic, but what works really well in the film’s favor is knowing how to mostly hit the sweet spot between camp and social commentary. That’s why I think comparisons to Get Out aren’t particularly fair to it: that one in spite of its more humorous bits is a far more self-serious film (which is not at all a bad thing) taking on American horror of the late 1960s, whereas this one is far more inspired by Italian giallos and early Brian De Palma and underground indie hits like Bill Gunn’s Ganja & Hess. Both Simien and Jordan Peele have clearly absorbed decades of the horror zeitgeist and have created something new as a result. I would still say that I enjoyed Get Out way more than this, but it more than redeems itself by being far more willing to make its points within the realm of cheesy-as-hell genre horror.

What’s surprising is how gory this film can get, and I realized it had been a while since I had seen a horror film which puts their lead character in a genuine feeling of tension and danger rather than a theme park ride or haunted house with occasional pre-scripted scares. Good scares are like good punchlines, and the film is not afraid of explicit body horror that can feel something out of a Cronenberg movie at times. The film doing this around an explicit late 1980s setting, George H.W. Bush weakly imitating the Reagan years, feels like even more a salient point now that we’re in the third or fourth rendition to call back the golden era of progress being forcefully revoked. Bad Hair is not a “Trump film” but it is interested in the commodification of Black identity, and the psychic wound that keeps rippling back and forth even as our discourse has tried for so long to pretend that it’s not there. It can be a bit clunky with its exposition, as Simien is not an especially subtle writer, and that might turn some people off. If anything, it feels even more like a loving homage to its inspirations to have characters so earnestly telling each other about the lore of its setting.

It also helps that the cast is mostly game for portraying the film’s larger than life tone and Elle Lorraine especially is able to really clue into the sweet spot between the silliness of the core concept without it looking self-aware about it. It’s a film that’s totally unashamed of being silly, especially as its third act cheekily pays off many a setup and shifts tones into something more like George Romero than Bill Gunn. You’ve got a lot of extended cameos from actors like Lena Waithe and Jay Pharaoh playing the various employees at Culture (which Vanessa Williams’ Zora rebrands as Cult partway through with tongue firmly in cheek), all of them seemingly having the time of their lives playing out horror tropes in ways that prove you don’t necessarily need to reinvent the wheel to create an engaging film.

But in the end, I think its particular adherence to horror tropes, knowingly so, might turn off some people in search of the next truly groundbreaking trend, which would be a shame. Once our inciting incident has kicked off on behalf of Laverne Cox’s mysterious hair stylist (a shame, she’s barely in the film), you may be able to predict where this film is going, but it’s even more surprising that even with that, it’s still fun to go along for the ride. Part of what Simien proves here is that most horror films fail because they adhere to tropes without an understanding how those those tropes work together and only put them there out of obligation. Simien both plays it safe by knowing how to construct a horror film with a twist on a familiar premise that can thrill an audience with its genuinely unsettling scares and he knows how to integrate the larger points he wants to make. It’s not a perfect film, and I’d argue its first third with its workplace drama is where it falters the most, setting up points that don’t really add up later on, but once we’re introduced to its twist on the Ganja & Hess story, it gains a lot more momentum.

I give Bad Hair a B. 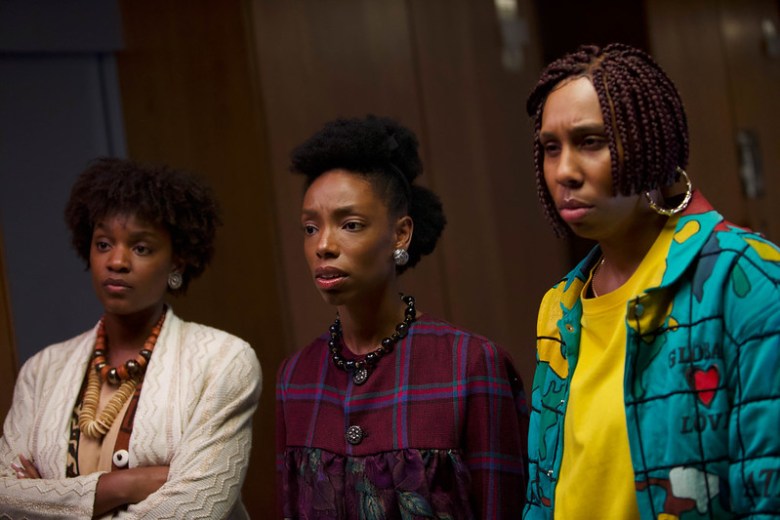