While his films might be an acquired taste, it cannot be denied that Ben Wheatley is one of the most unconventional voices in contemporary cinema. Personally, I love Ben Wheatley and have enjoyed all of his films to varying degrees (with High-Rise, Wheatley’s most polarizing feature in a filmography full of them, being my favorite of his), one reason being that I find his unorthodox approach to filmmaking, in an era where it almost feels like idiosyncrasy in filmmaking is sadly dying, to be highly refreshing. However, given that multiple adaptations of Daphne du Maurier’s Rebecca already exist, with the most famous one being the Best Picture winner directed by Alfred Hitchcock, I couldn’t help but be highly curious as to what Wheatley would do with this project, and was even cautious after discovering that this is the first of Ben Wheatley’s features to not be written by him or his writing partner Amy Jump. It certainly didn’t help that the the trailer left much to be desired.

That said, maybe I shouldn’t have been worried, because even despite operating on a more accessible level, this new adaptation of Daphne du Maurier’s acclaimed novel not only proves to be another stellar effort from an idiosyncratic filmmaker with an already commendable body of work, but is one that even improves on Hitchcock’s film in various aspects.

Having just watched Hitchcock’s Rebecca for the first time a bit over a month ago, I was very curious to see what Wheatley would do to differentiate his film from Hitchcock’s film and other adaptations, and sure enough, he makes quite a few interesting changes. For one, this version of Rebecca leans much more into psychological territory than Hitchcock’s film, and in that respect, credit must be given to Wheatley, writers Jane Goldman, Joe Shrapnel, and Anna Waterhouse, and the talents of the crew that this film feels relatively distinct despite being another adaptation. Laurie Rose’s cinematography, Jonathan Amos’s editing, and Clint Mansell’s score, coupled with Wheatley’s top notch direction, all take part in giving this adaptation an incredibly unique flair. The second major change is a twist in the ending. To spoil it would be a disservice to the film, but I will say that I might even prefer it over the ending of Hitchcock’s film.

In addition to the aforementioned, credit must also be given to the cast and their performances, especially in being able to provide their own takes on their characters despite a beloved adaptation of this story already existing. For starters, Lily James is excellent in the leading role of the second Mrs. de Winter, especially in portraying the innocence and naivety that is required in playing that character. James has shown potential in roles that had given her very little to work with on multiple occasions, and in what is the first role I’ve seen her in that gives her genuinely good material to work with, she delivers what is by and far her best performance to date. As for other highlights in the cast, Armie Hammer, Sam Riley, and Ann Dowd all deliver great work as Maxim de Winter, Jack Favell, and Mrs. Van Hopper, respectively. However, the best performance in the film comes from Kristin Scott Thomas, who is phenomenal as Mrs. Danvers. This was a casting that I knew that would be perfect ever since seeing Hitchcock’s film, and Scott Thomas not only fully lives up to my expectations, but outright exceeds them. It’s one of the best performances of the year.

If there’s anything else to be said about Ben Wheatley’s Rebecca, it is further proof that despite previous adaptations of beloved novels already existing, new adaptations can still feel very fresh if and when you have the right talent working on them. On its own, this is an exceptional film that further proves as to why Ben Wheatley is one of the most interesting and idiosyncratic voices in contemporary cinema, and arguably one of the best at that. One of the best films of the year, and I strongly recommend checking it out once it hits Netflix.

I give Rebecca an A. 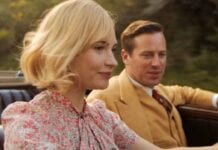