There are many modern-day adaptations of Shakespeare, but not so many of Jane Austen. The worst, much like with the Bard, are stodgy and just have the actors stating their lines in period garb with very little context or understanding as to how the lines work. Austen and Pride & Prejudice in particular has had some better luck (I’m a particular fan of the Keira Knightley/Matthew Macfadyen version), and the newest one to arrive is a modern day take. Instead of posh Brits, it’s a bunch of cis gay men on the titular island as they party it out for the last time ever. Maybe along the way a few of them will find love and stuff.

Noah is built with a sixpack, kind of a dumbass and is proudly non-monogamous, Howie is more of a babyface, a virgin at 30, and desperately wants that rom-com romance. For once, these two types are not paired together as a couple, rather two extremely close friends who will end up butting heads over their respective views on love. Even if the more traditional relationships will win in the end (this is an adaptation of a Jane Austen novel, after all), this film is less pushy about it than most. Fire Island is a refuge for both of them, along with an assortment of other friends who are mostly one-dimensional and don’t do much. Each gets entangled into a complicated web of romances and awkward dynamics, the ways that cis gay men can often be absolutely nasty to one another. Howie is constantly made fun of for his weight simply for not having a sixpack, while Noah is constantly trying to maintain his body for the sake of his own desirability. This dynamic plays out across the film, Noah massively overcompensating and Howie sinking further into self-loathing as a result of all the bullying he receives on this trip. Howie falls for a rich doctor called Charlie, while Noah gets into a love triangle with an aloof lawyer called Will and an influencer called Dex.

That’s essentially the movie, and that’s not necessarily a bad thing. The movie mostly is the dynamic, the ways in which queerness (albeit in cis gay men exclusively) can be segmented and forced into hierarchies as much as you see in straight people. “No fats, no femmes, no Asians” is a mantra repeated ironically by most of the cast as the film’s wealthier (and more muscular) white characters heap an entire helping of subtle barbs and abuse at their BIPOC counterparts at every opportunity. What I do like is that this is the rare film where a character’s lack of sexual experience (in Howie’s case) isn’t treated as a burden or something shameful, and despite Noah’s much greater amount of experience, he’s never adding to the mistreatment Howie gets for it.

It helps that director Andrew Ahn (Spa Night) has crafted stories about queer love before, and writer Joel Kim Booster (also starring as Noah) is very invested in the dynamic between the two leads. Their eventual romantic interests (if you’ve read the book, it’s more predictable) take a backseat to the agape love between two friends. That I really like, even as not everything lands exactly. As stated previously, other than Noah and Howie, pretty much every other character is one-dimensional and tends to be there for background flavoring. The one who acquits himself the most is Will, played by Conrad Ricamora, who gets a lot more time than the others to develop past his prickly exterior. He’s got a really corny sequence where he’s forced to participate in a dance-off that goes a lot better than scenes of that kind normally go. The biggest highlight of the whole cast is Bowen Yang as Howie, finally given a vehicle to work with that isn’t turgid Saturday Night Live sketches. A character as overtly vulnerable and sensitive as he is would be played as a mean joke in any other film, and it’s to his credit (and Booster’s) that he’s played sincere in a way most comedies like this wouldn’t go for. That much I appreciate. Ahn’s warm direction also goes a long way, which is such a radical departure from the handheld coverage most studio comedies resort to these days.

What might put some people off, gay or not, is that as much as this often does things I enjoy and appreciate, is maybe the same reason some people are put off by its closest television equivalent, Queer Eye. Going beyond even the basic comparisons, this is also a film about literally buying your way into community, these self-described “poor queers” pinching every possible penny to be able to make it to this exclusive yearly event that prioritizes white and wealthy queers. The film eventually drops off on any question of whether or not this is even remotely ethical (it’s not), and it openly talks about how this event is the only way any of them can interact with other gay men openly. That’s what reminds me of Queer Eye the most, in spite of the good intentions both clearly have: the show states you can have the body, peace of mind, and aesthetic that will make you look and feel good…if you’re able to afford it. The difference, of course, is that this is nominally about how queer communities are commodified to take advantage of them, whereas the show is primarily about four gay men (and one non-binary person) catering to cis straight men with no basic hygiene whatsoever. Fire Island may not directly peddle sponsors and product placement the way Queer Eye does, but it does flirt with greater commentary on this before abandoning it entirely in service of a final dance sequence. Fire Island also is, ironically enough, a Disney movie (through Searchlight Pictures and Hulu, both Disney-owned). Is that Andrew Ahn and Joel Kim Booster’s fault? I don’t think it’s entirely fair to blame them, so I’m not going to. The flip side of there being so few films and shows by queer creators is the amount of compromises those creators have to engage in just to be seen. How many times is a story about queer characters told by people who aren’t queer at all, starring people who only fall in love like that on the silver screen?

This film often strays really close to being sort of an insightful takedown of heteronormative tropes in these kinds of films, only to swan dive back into them the second the film needs it to. One could argue it’s not fair to put that kind of pressure on one of the very few rom-coms starring gay leads, and that’s not a point I can dismiss. Why don’t the ones with straight leads have to do shit like that? Yet this film really does seem to have some basic points to make about the ways in which queer people relate to one another and fall in love and how it’s influenced by heteronormativity. The casual racism that defines the island, the tension between casual sex and a committed relationship, the ways in which people are judged based on their body’s size and shape. Having its two leads being on two opposite ends of that spectrum is reason enough for it to be asking those questions. With that kind of ambition, I just want to see follow-through, and that could be asking for too much. And I do want to be clear: despite these criticisms, this is still a film I overall enjoyed, and I wish it could decide if it wants to be social commentary or a rom-com with no strings attached. I don’t think it can be both. I think it would work a lot better as just the latter.

I give Fire Island a B. 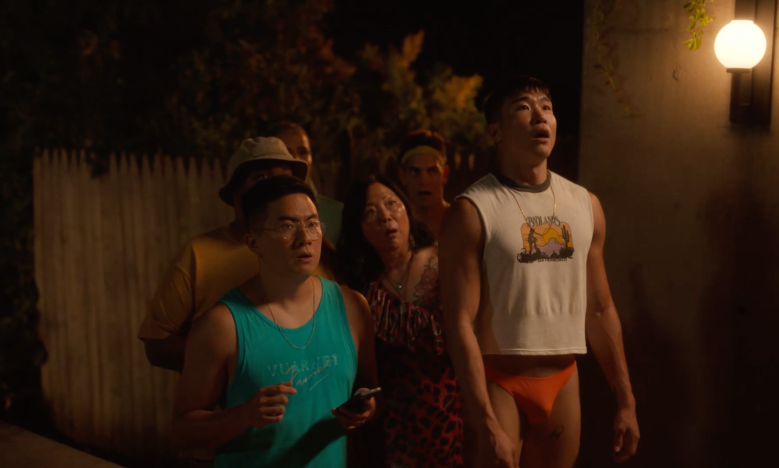