A League of Their Own premieres on August 12 on Prime Video.

For pure aesthetics, A League of Their Own is the best show of 2022. 1940s costumes? Great baseball? Abbi Jacobson? Yes, please. The ten-episode season just feels like the best hang in the dugout, and the chemistry between the teammates on the Rockford Peaches is palpable.

I have never seen the 1992 movie that was the inspiration for this series, so I can’t comment on the similarities or differences. That being said, there are a number of critiques to lob against the show. The most prominent one is the underdeveloped characters. For a show about the importance of a team, only two or three of the ballplayers really get time to be fleshed out and become fully three-dimensional in the minds of the audience. This is especially disappointing because the actresses who round out the rest of the cast are all phenomenal. Kate Berlant, Melanie Field, Roberta Colindrez, and many more talented actresses get the short end of the stick in favor of Jacobson’s Carson Shaw and D’Arcy Carden’s Greta Gill. The time they do get is well spent, adding either comedic relief or emotional stakes to the Peaches’ championship run. but if you’re turning a movie into a television show one of the perks should get to be more expansive storytelling.

Where the show does succeed is in its social commentary. Some will say that A League of Their Own is too preachy, but at its heart, this is a show about groundbreaking feminists. It’s only natural that in the 2022 version of this tale, a lot of time would be devoted to touching on the horrid sexism and racism that women, and especially women of color, faced during this era of American history. The writers’ depiction of the discrimination the players need to deal with is unflinchingly brutal. Additionally, many of the characters are queer, and getting to see the decade from their perspective was really eye-opening.

While the majority of the show follows the Peaches, a large chunk of the runtime is spent on Max Chapman, a black woman trying to break into baseball. While Max’s plot line is deliciously written and Chanté Adams plays the pitcher with precision, the decision to separate her and the many characters that orbit her from the main plot of the show is a confusing one. Max does run into the other protagonists from time to time, it feels very convoluted. Luckily the stellar group of actresses saves the show during its most boring moments, of which there are a couple.

The season has many ups and downs; both in the literal baseball sense, but also in quality. The opening stretch is exciting and dynamic, then things slump in the middle. Thankfully it all builds to an exciting finale where relationships formed over the course of the season come to a head – sometimes with devastating fallout. Plus, the conclusion of the last game brought this reviewer to tears. Maybe sometimes there is crying in baseball.

I give A League of Their Own a B+. 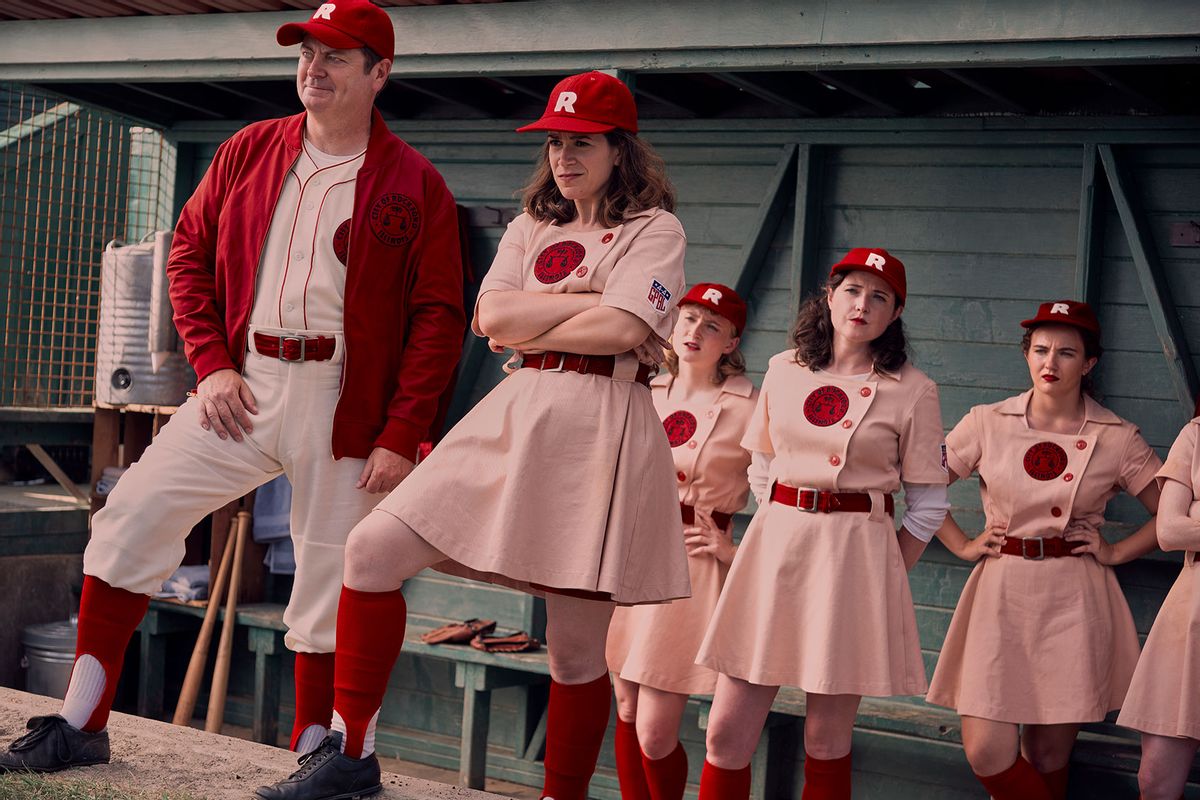