The Guardians of the Galaxy Holiday Special is now streaming on Disney+.

Director James Gunn closes out Phase 4 of the MCU with this latest adventure featuring the titular space heroes. But this time around, they aren’t trying to save the universe from another finger-flicking menace. Instead, the Guardians are tasked with trying to save Christmas!

Don’t worry – the holiday season isn’t about to evaporate from existence. There is no Scrooge-like space monster trying to eliminate Santa at the North Pole! This time around, the stakes are strictly personal because two of the Guardians, Drax and Mantis, realize Peter no longer feels the Christmas spirit.

After Kraglin recounts a story about Yondu ruining Christmas for Peter when he was a child, Drax and Mantis decide to save Christmas for their captain by getting him a gift. It’s a nice thing for them to do but rather than get him a new mix-tape or a nodding figure of Groot for the dashboard on his ship, they decide the ideal gift for Peter will be his favorite Earth hero: the actor Kevin Bacon!

The scene is then set for a series of comical misadventures as Drax and Mantis journey to LA to retrieve the legendary actor. After a brief stop-off on Hollywood Boulevard, where Drax beats up a man in a robot costume and Mantis confuses an actor dressed as Captain America for the real hero, the two arrive at Bacon’s home. What follows is a very funny sequence featuring the two Guardians chasing Bacon around his house and through the streets of his LA neighborhood while he desperately tries to escape their muddled abduction attempt.

The banter between Drax and Mantis is never less than hilarious and they are a joy to watch as they venture through the streets of Hollywood. Bacon brings on the laughs too, ably playing himself without spoofing his real-life persona. They get the majority of this short film’s running time but there is still room for the other Guardians to make a minor impact, including Cosmo the Space Dog who is now formally a part of the team.

You shouldn’t expect any wider tie-ins to the Marvel Cinematic Universe in this short-but-sweet tale but there is one character reveal that might have repercussions for two of the Guardians further down the line. The ‘reveal’ might not be much of a surprise to you if you remember the events of the last Guardians Of The Galaxy movie, but regardless, it’s important that you know this short tells a deeper story than what you may have been expecting.

As this is a Christmas-themed special, you can expect heartwarming messages about family and the importance of being together during the holiday season. Thankfully, this isn’t as sentimental as many of the other festive films that clog up our streaming services but there are moments when you might actually shed a tear, especially during the closing chapter when Peter realizes the efforts his team have gone through to make Christmas special for him again. The laughs aren’t too far behind so you don’t have to worry about this being a total blub-fest but it’s good that writer-director Gunn has managed to infuse this holiday special with a few moments that will truly touch your heart.

Beyond the misadventures of Drax and Mantis, there is room here for animated sequences and catchy musical numbers, with the latter including a song about Santa Claus and his evil elves!

As the song is sung by characters from another planet who know nothing about Christmas other than the bare basics, you can forgive them for misinterpreting the intentions of the jolly red fellow and his band of merry toy makers. You might want to remind your kids of this when they hear lyrics that detail Santa’s career as a master burglar who hurls sugar plums at people’s heads and who roasts chestnuts (possibly meant as a euphemism) with his flamethrower!

This latest entry for the Guardians is a joyful excursion into their universe and is just the thing if you’re feeling a little low during the Christmas season. It should be funny enough to make you laugh out loud so it is bound to raise your spirits if you are in need of some festive cheer. And unlike the in-laws who might land on your doorstep during the holiday season, it doesn’t overstay its welcome, so you don’t have to carve too much out of your time if you need a quick burst of Christmas magic to warm your heart during this chilly time of year.

I give The Guardians of the Galaxy Holiday Special a B. 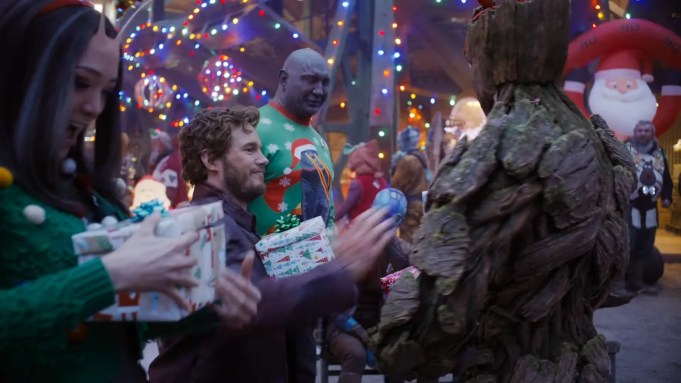