The once-affable Jimmy (Jason Segel) has fallen into deep despair after the premature death of his beloved wife. That tragedy has ruined plenty of his friendships and his relationship with his teen daughter. All the pent up frustration is affecting his job as a therapist, where he begins to tell patients exactly what he thinks and offers up brutal advice without the usual sugar coating. Surprisingly, this unconventional method seems to work, and Jimmy continues to practice this technique as the boundaries between him and his clients collapse, helping both him and others at an ethically murky cost. Reading the premise of Shrinking may make it sound like a drama, but I can assure you it’s a comedy series, and a very successful one at that.

Shrinking comes from the creative team behind another Apple TV+ hit, Ted Lasso, and you can feel that same positivity and sweetness in the show’s DNA. The show is surprisingly cheerful given the subject matter, but the writers still handle loss and grief with gravitas. Perhaps most importantly, the jokes are really good without kneecapping the emotional impact of heavier scenes. That is a super thin line to tread and Shrinking does it with grace.

The office’s therapist trio consists of Segel, Harrison Ford, and Jessica Williams, and they are golden together. Their three distinct personalities blend together so well — Ford’s bluntness, Williams’ hyperactivity, and Segel’s earnestness are a perfect sitcom mix and their characters’ banter is super enjoyable. Ford especially shines, given that this is the first time audiences have gotten to see the storied actor in a true comedic role. The guy is legitimately funny and it’s a shame he hasn’t done more parts like this one.

Segel is still the lead though, and fantastic as ever in his first TV gig since How I Met Your Mother. Over the course of the ten episode season, Jimmy gets himself into so many situations that would turn you off from rooting for him if the character was in less capable hands. Segel is able to make him loveable even at his lowest moments. Minor and side characters have plenty of time to be fleshed out as well, as we get to know plenty about Jimmy’s daughter Alice (Lukita Maxwell) and how she has been handling the loss of her mom, and even Liz (Christa Miller), their nosy neighbor, grows on you the more she appears.

Even the opening credits are great! Visually and thematically, the show’s intro is the best in recent memory.

A few plotlines are seemingly dropped, although in full disclosure, critics were given all episodes to screen but the finale. The first half of the season is much more episodic, with Jimmy helping a different client in each installment. As many relationships alter and evolve in surprising ways throughout the course of the season, the show loses its original premise a bit and becomes one track minded. This means intertwining all the characters in each other’s lives to an unrealistic degree. But hey, it makes for good TV.

I give Shrinking an A-. 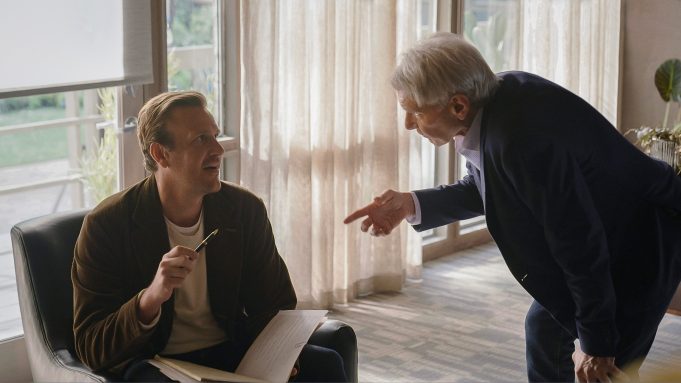