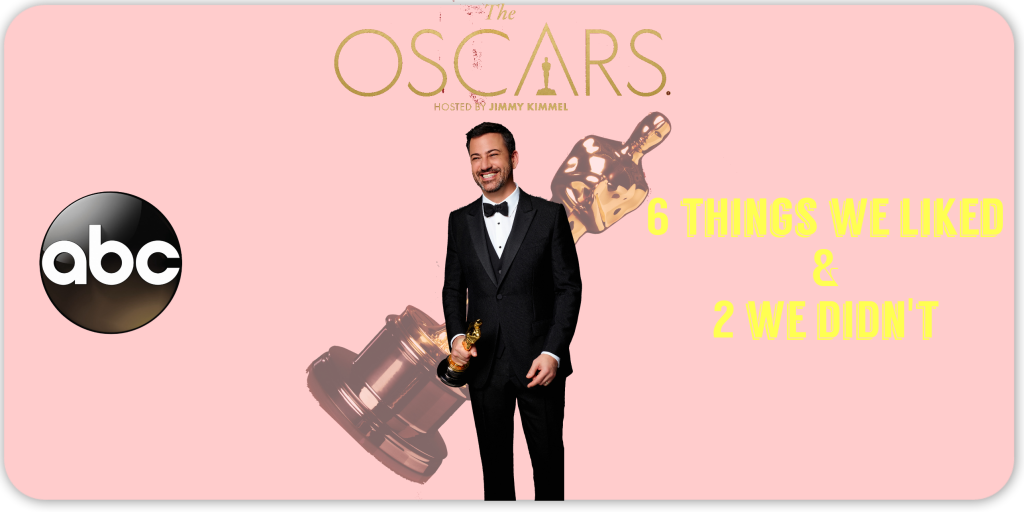 The 89th Academy Awards, despite the long runtime, kept us interested the whole evening. Viewers were treated to a fun broadcast with many highlights (and yes, a major mistake that will live in infamy).

Here are the parts we loved:

Kimmel is a fantastic host as shown at this year’s Emmy Awards, but taking on the Oscars is an even harder feat. His opening monologue was especially fantastic and you could tell the audience felt the same way. There were many political jokes and he obviously made some jokes at Matt Damon’s expense in typical Kimmel fashion. He had no standout lines but did a solid, all-around job. Kimmel wasn’t nearly as good as good as Chris Rock last year, but was entertaining nonetheless. Dropping parachutes filled with candy into the audience Hunger-Games style was very cool. Mean Tweets: Oscars Edition was the icing on the cake of a great night from Jimmy.

Justin Timberlake opened the show with his Oscar-nominated song “Can’t Stop the Feeling!” from Trolls. With his fantastic stage presence and choreography, JT brought the Dolby Theater to its feet. Afterward Kimmel joked that “N-Sync might want Timberlake back after that.” Then, after a hilarious introduction from Dwayne Johnson, Lin-Manuel Miranda rapped, setting up a performance of the nominated song “How Far I’ll Go” by Moana herself, Auli’i Cravalho. John Legend also did a great job performing the two nominated songs from his film La La Land, “City of Stars” and “Audition (Fools Who Dream).”

Casey Affleck was truly deserving of this award for his leading role in Manchester By The Sea. This was his very first Best Actor win, making it all the more special. It’s a big win as he’s now stepping out of his brother Ben’s shadow.

Davis delivered the best performance in any movie this year, male or female. Her win for Fences was not a surprise, but that doesn’t make it any less satisfying. She then gave a very emotional speech about dreams and how important being an actress is to her.

Gary Allencoe rolled in with the rest of the tour bus but quickly stole the show. He wouldn’t put away his phone and continued filming until Kimmel told him that he was on TV. When his fiance told Kimmel that they were getting married in a few months and her favorite actor is Denzel Washington, he came and pronounced them husband and wife. It was a sad sight to see him escorted out of the theater. Anyone who gets to have Denzel ‘officiate’ his wedding immediately makes this list. Kudos to the writers’ room for pulling off this hilarious stunt. It would have been the most talked about bit, unfortunately the mishap that shall not be named occured. More on that later.

As I wrote about in yesterday’s predictions article, I thought La La Land was a fantastic film. Brilliantly directed by Damien Chazelle, this wonderful musical, chronicling the love story between Sebastian (Ryan Gosling) and Mia (Emma Stone) was the best movie of the season. It may not have taken home top honors, but it still cemented its legacy as modern classic.

1) The In Memoriam (Song Choice)

The In Memoriam is usually the most emotional part of any awards show. But I simply wasn’t moved by the music, and felt that it was poor song choice. I would’ve chosen Hallelujah, which is a much better song, especially just a few months after the passing of Leonard Cohen.

How did the Academy screw up so bad? I am still in absolute shock about what just happened. Moonlight should have a shot at Best Picture, but an envelope mix-up like that is just unacceptable at such a huge event. What a disaster. This moment will live in Oscar infamy. I feel so horrible for the cast and crew of La La Land. I mean, after making a whole emotional speech to his wife, that’s just gotta be killer. Let’s just say, someone’s definitely getting fired tomorrow morning. Imagine the viewing parties across the globe freaking out in unison. 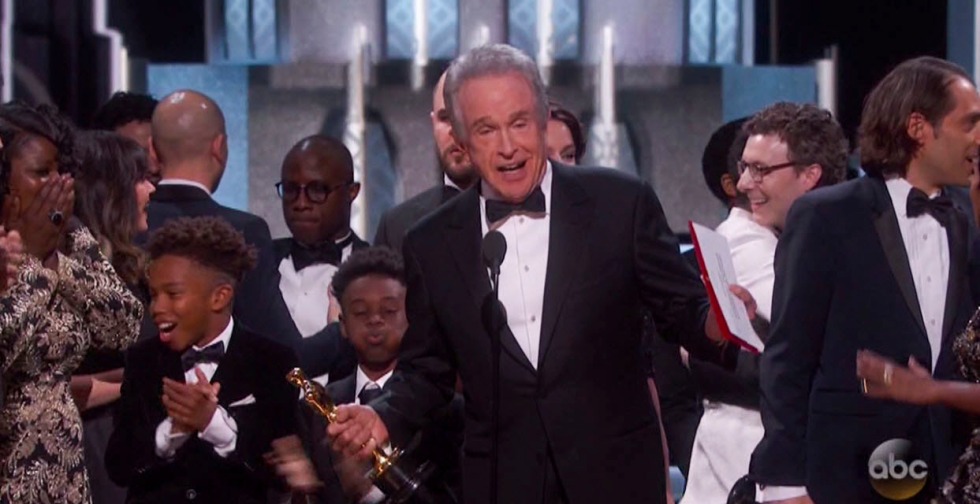