The third season of Catastrophe is available now on Amazon Prime.

The dark comedy Catastrophe follows Sharon and Rob (actors Sharon Horgan and Rob Delaney) through the trials and tribulations of their complicated relationship. Deciding to get married in Season one, after Sharon became pregnant from spending a few nights with Rob when he was visiting England on a business trip, the couple now has a toddler and new baby. While Season 2 started with a time jump, Season three picks up right where we left this couple at the end of the previous episode. Back together after a short separation, Rob and Sharon are faced with questions of infidelity, aging parents, financial crisis, issues of working mothers and stay-at home fathers. They deal with friends (Dave, as well as Chris and Fran) and siblings (Fergel) who are all struggling with their own calamities.

In six short episodes, the show realistically portrays the ups and downs of marriage and life. It’s a comedy that also makes you want to cry. For one episode, you sympathize with one character and in the next, you hate them. Despite all their issues, Sharon and Rob do love each other and the fact that they can also be angry at each other and criticize each other harshly, makes their relationship authentic. Even when they seem self-centered (a lot of the time, in my opinion), they do want to be a team. It’s never clear who is at fault, or if anyone is to blame – or this is just how life is and you decide to go through it all together.

One ironic piece of this season is that Sharon’s father (played by Gary Lilburn) passes away, while Rob’s mom, played by Carrie Fisher in her last role, comes to visit from the USA to comfort everyone. Fisher is her usual acerbic self, the perfect mother/mother-in-law, for this show.

This season is even a little darker than the previous two, as we watch Rob spiral downward with his alcohol addiction. At first, his dabbling appears to be under control, perhaps as Rob himself believes, but then both Rob and the viewer understand there is a serious problem. The season ends by “hitting rock bottom” and hopefully, things can only get better in Season 4. Let’s hope the couple can weather this catastrophe together.

I give Catastrophe’s third season an A. 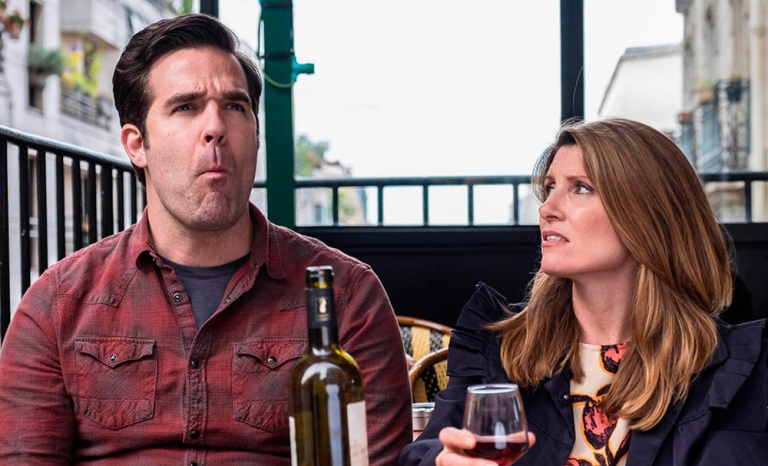