You can watch all episodes of Vindicators 2 on Adult Swim’s YouTube channel.

In Rick and Morty, Rick Sanchez, a scientist whose intellect grants him God-like abilities, slaughters most of The Vindicators using booby traps he set while blackout drunk. Rick’s grandson Morty was angry because he had looked up to them as heroes, much like we look up to Marvel’s Avengers. However, Rick exposes each of them as frauds, not people to be admired. The new Vindicators 2 show develops further the idea of the group being phony heroes in a semi-dark/semi-humorous vein.

The show starts off with The Vindicators debating whether to fight Doom-Nomitron who was bent on decimating Earth. They decide it would be too dangerous and opt to avoid the situation altogether, hoping Rick will somehow save the day. This episode sets the tone for the rest of the show that The Vindicators are a joke team who can’t handle a real challenge and are not caring people.

After a strong opening, the show does take a bit of a downturn in terms of plot development. Episode 2 is devoted to Million Ants setting up a dating account and episode 4 is about The Vindicators running out of gas. The worst of all episodes is easily episode 3 which is about Crocubot dancing and was quite cringy. Still, each of these episodes does have its funny moments that make up for its lack of storyline.

I think episode 5 starring Noob-Noob was hysterical and probably my favorite episode. The twist at the end is that the girl he fell in love with was actually a minor (don’t worry, Noob-Noob got out of there fast), which I found to be outrageously funny.

While Rick and Morty fans know The Vindicators to be a pretty pathetic team of heroes, we never saw them as actual villains. However, in the last few episodes, the show quickly turns into a cartoon version of Amazon Prime’s premier show The Boys. Supernova is essentially Homelander, murdering civilians without a second thought. She even accidentally kills her own teammates while intoxicated in episode 7. Team leader Vance Maximus is always shown as a rude person behind the scenes who cares more about fame than doing the right thing. In episode 9, Rick’s defense satellite defeats Doom-Nomitron, without Rick noticing. Supernova takes advantage of that and lies to the public by claiming the victory as the Vindicators’ own doing.

Perhaps the most significant parallel to The Boys is that all of the evil acts by The Vindicators are done whenever there aren’t any cameras. This helps them maintain the facade that they are good heroes, just like many of the superheroes in The Boys who maintained a positive image only when being recorded.

During the last episode, we witness certain members of The Vindicators are in fact regretful of their actions and feel horrible going on stage. Moments later after their alien fans cheer for them reward them with medals, and play a tribute video for them, in a state of cognitive dissonance we see they’re all smiles and proud to be there. This was very much in line with The Boys where many of the heroes despite their evil actions, convince themselves they are good and love being praised by their adoring fans.

Even though each episode is extremely short, creator and executive producer Sarah Carbiener, and his team did a fabulous job of giving each character a lot of depth. All the characters essentially got to be the featured or co-featured figures in at least one episode. We saw Alan Rails morally conflicted. Noob-Noob was ignored and put down by his teammates, but we learn that he secretly was a genius who claimed he could have taken out Doom-Nomitron easily using biochemistry. Crocubot had a weird solo dance episode. Million Ants who previously was known only for having an affair with Supernova was given depth as a complex figure seeking love. We witnessed the atrocities of Supernova. Vance Maximus made a profoundly morbid statement in the last episode about how The Vindicators can never be perceived as villains because whichever group they kill, the survivors will celebrate them. There was so much to unpack, yet the entire show was about the same length as just a single episode of Rick and Morty.

If you are a fan of Rick and Morty, you are going to love Vindicators 2. Its dark and twisted humor is done very well and the plots are generally interesting. I recently finished The Boys for the first time and enjoyed seeing the similarities between both shows. I have already seen each episode twice and recommend everyone, including non-Rick and Morty fans, to give it a viewing. 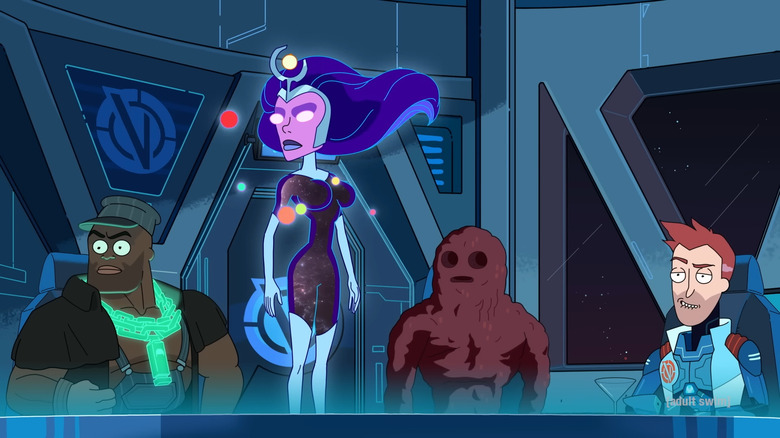