The Pale Blue Eye will be available to stream on Netflix on January 6 after a short theatrical run.

A good old fashioned mystery movie is just what’s needed this winter season, and here’s one that takes itself a bit more seriously than Glass Onion.

The year is 1830 and detective Augustus Landor is tasked with solving a series of murders in West Point, New York. A simple enough premise for a film, only this also doubles as an origin story for one of the most famous mystery writers of all time, Edgar Allan Poe. At this point in time, Poe is a young cadet at the military academy who has a keen eye and begins to aid Landor with his investigation.

There’s a lot of good in The Pale Blue Eye, starting with the lead performances. Christian Bale is Christian Bale, what else needs to be said about his talent at this point? He commands every frame he’s in and chews up the scenery as Landor, a man who has more to his past than meets the eye. Henry Melling (best known as Dudley in the Harry Potter movies) gives a layered and rich portrayal of the young Poe that enamored me. The pair’s dynamic is great, and the script is dynamite when the two of them are delivering their lines back and forth in turn. “I don’t get around to poetry much,” says Landor at one point. “Why should you? You’re an American,” replies Poe. “And you?” Landor retorts, knowing full well Edgar was born in Boston. “An artist. That is to say, without country.”

Character actor Toby Jones is also great in a smaller role as the school’s doctor, as is Gillian Anderson as his wife.

The cinematography is gorgeous, capturing the beautiful snowy landscapes of New York state. It’s a moody setting for the story — watching it makes one feel cold and want to get under the covers, which will be beneficial as some of the gory scenes will make you reach for a blanket to duck under. This is not something I usually notice in films, but Blue Eye is perfectly lit. Indoor scenes, like those at a local pub, crackle with candles and fire lamps. The ambiance of the film is very well executed.

The Poe Easter eggs may be a little much for some. One scene is transitioned to with a shot of a raven cawing. And of course the central case involves a stolen heart, it’s hard to not invoke The Tell-Tale Heart, one of Poe’s most famous short stories.

Unfortunately, what starts as a compelling adventure goes downhill quickly. Without giving too much away, once the evidence starts to point towards the occult, the quality of the story really nosedives. A last minute twist is interesting enough but has huge ramifications for the preceding two hour runtime and doesn’t sit right with me. The last act completely unravels the entire film. Because of that, The Pale Blue Eye is ultimately a mixed bag. If you can focus on the positive and not feel cheated when you walk away unsatisfied, then please do check it out.

I give The Pale Blue Eye a B+. 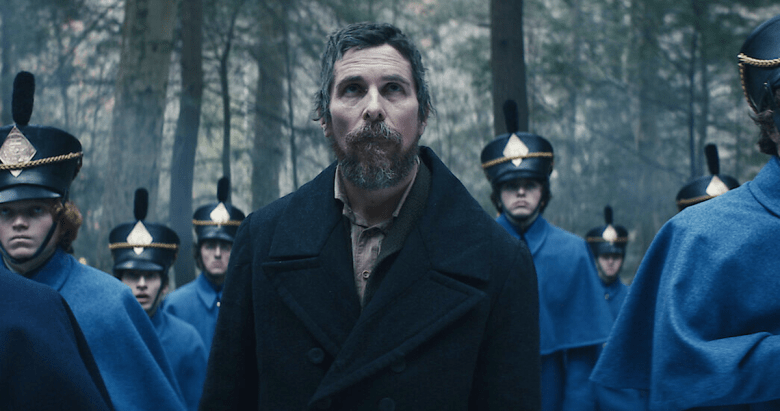