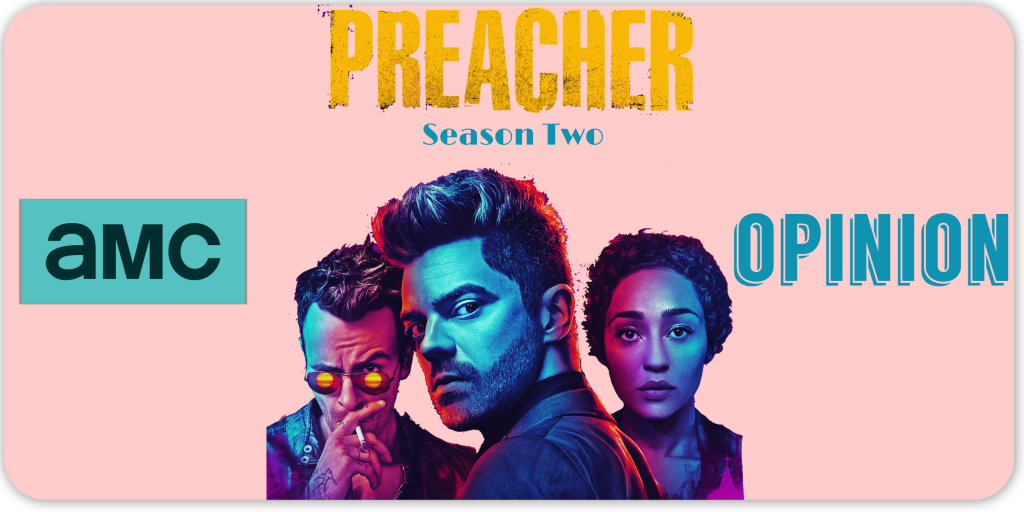 The second season of Preacher premieres June 25, 10pm on AMC, with another episode on June 26.

I loved the first season of Preacher on AMC. From the writers of Breaking Bad, this was the show I was anxiously waiting for every Sunday. The acting was fantastic and as bizarre as the violence was, it still felt realistic. Fiore, DeBlanc, Cassidy, Tulip, and every minuscule role was brilliant. If you haven’t seen this show, watch it. This is good writing. Season 2 is sure to be just as good.

I can’t say the same for the source material though. If I thought the show was a bit bizarre, the comic books were just total bonkers. There is no rhyme or reason for half of the plot points. People get killed in droves, which doesn’t bother me except it’s pointless, and there for mere shock value. It wasn’t dark like the Lucifer series, it was just plain ridiculous. If it wasn’t for Cassidy’s character, I wouldn’t have made it past the first graphic novel.

Jesse (the protagonist) himself is severely unlikable, and Tulip is presented as someone for him to have sex with and ‘protect’. At first, he just tries getting in her pants, despite repeated shut downs, until she gives in. Ugh. They keep having conversations about how she’s her own woman and can take care of herself to make us think it’s empowering but then Jesse shuts her up by saying it doesn’t matter. I just hate the way she is portrayed, hiding behind a feminist veil while being the exact opposite.

Reading Preacher was kind of like reading the House of Cards novel after watching the Netflix show. Where are the amazing characters? The dark, deep storyline? We need that more than a pile of bodies and constant sex. It’s just so… disappointing.

In conclusion, the Preacher TV show is infinitely better than the comic. Maybe if I was on acid I would enjoy it? I don’t know. Maybe I just didn’t “get it.” I’ll stick with the screen version from on now.

[Editor’s Note: Huge thanks to Anna Kopp from Words Matter for this guest post! Check out her site for more great content!]