The Ultraman reboot is now streaming on Netflix.

Growing up in the 90s, my after-school TV watching consisted of V.R. Troopers, Power Rangers and Kamen Rider. Little did I know that all of these were inspired by the popular 60s Japanese hero, Ultraman. Fast forward to 2019 and Ultraman returns to Netflix in anime form, acting as a sequel to the original series all those years ago whilst basing its plot off the more recent manga back in 2015. With a unique CG-animated aesthetic, Ultraman’s visuals will likely divide opinion but the story and general feel of the show does an excellent job remaining faithful to its source material.

The series begins with a brief glimpse of the past. Our hero, Shinjiro, is a young boy and as he gazes at the world in child-like wonder, his Father shields him from the knowledge that he’s really the hero Ultraman. Fast forward in time and Shinjiro has grown up, attending school and oblivious to a very real, present danger that’s just presented itself to the world. Not long after, a menacing, metallic figure appears, immediately chasing Shinjiro which leads to them escaping into a nearby stadium. Thankfully, Ultraman shows up and the two square off.

After being badly injured in the ensuing conflict, Shinjiro’s Father passes the “Ultraman Factor” to his Son. This strange essence holds the key to unlocking the true power of being a hero, which Shinjiro quickly comes to realize, is not as simple as it first appears. Thwarting the threat for not, this being known as Bemular remains an ever-present problem for Ultraman. Realizing he can’t do this alone, Shinjiro is enlisted for help by the SSSP where he learns how to truly become a hero whilst using his powers for good, thwarting alien threats to the planet while preparing for the inevitable final showdown.

The story itself develops well, with enough reflection and tender moments of inner turmoil to help you really empathize with Shinjiro as he navigates the dangerous world of becoming a hero. Much like other superhero shows, Shinjiro constantly finds himself juggling his normal, teenage life with the pressures of being a hero and this conflict comes to a head late on, when pop sensation Rena finds her life in jeopardy at the hands of a menacing black and white alien.

Ultraman is surprisingly faithful to its source material too, with the usual array of colorful, larger-than-life enemies reinforcing that early, cheesy TV show vibe without ever feeling cliched or silly. Some of that is thanks to the dialogue too which is peppered with an array of swearing throughout. This does make Ultraman a show you probably won’t want your kids watching but it also adds a realism that makes this anime a much more mature prospect, and ultimately shine.

The big talking point here will inevitably be the visuals. The first few episodes are admittedly a little rough around the edges and it does take a while to adjust to the slightly choppy nature of the editing. Once accustomed to this style though, Ultraman really comes into its own and delivers some fantastic set pieces. These fight sequences are really where the show excels and whether it be the impressive smoke or the beautiful lighting effects that accentuate the 3D models, Ultraman makes the most of its color palette, and run time, delivering a visual feast of colors throughout.

Much like other animes of its kind, it’s highly recommended to watch this one subbed with the original Japanese audio. While the English dub isn’t necessarily bad per-se, a lot of the translation has been completely warped with multiple scenes full of embellished lines and dialogue not matching the subtitles. Whilst I do appreciate this is something that’s somewhat of a mainstay in dubbed, foreign material, it’s particularly problematic here.

Given the way this one ends, it’s unlikely we’ve seen the last of Ultraman. While the plot resolves most of the big talking points, there’s enough left open for a possible second season to follow. The visuals will certainly be a deciding factor for many people and those expecting a more traditional hand-drawn anime may well be left disappointed. Although I’m not the biggest fan of this art style, it certainly grows on you and if you can look past that, there’s a great story at the heart of this one that should please both anime and superhero fans alike.

I give Ultraman a B. 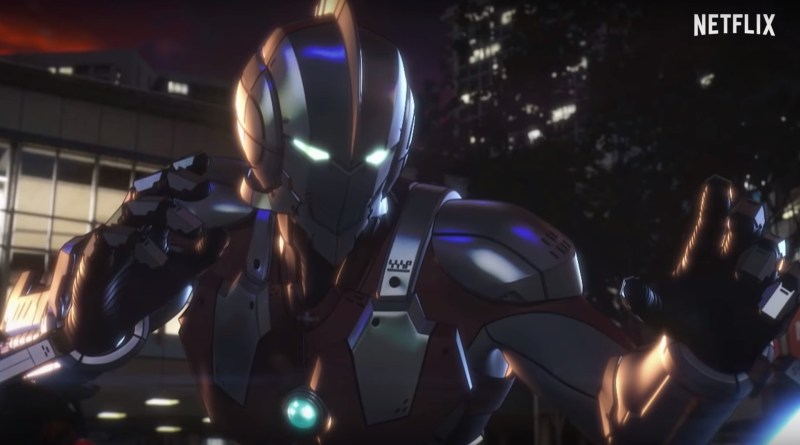